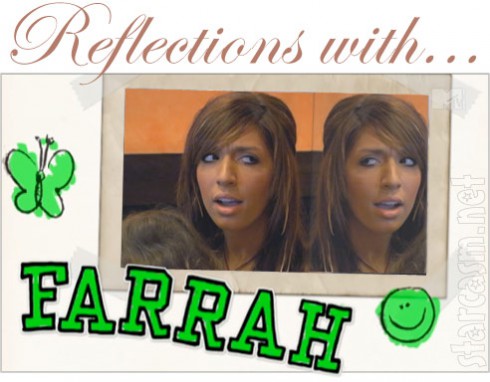 To be honest, I don’t really know where to start when writing about the interview Teen Mom‘s Farrah Abraham gave to Miami New Times this week. I could begin by mentioning Farrah said James Deen, her Vivid Film co-star, was actually her boyfriend at the time. Or, there’s the fun little tidbit where Farrah crowns herself “probably one of the best parents you’re ever gonna meet.” But, no, it would be an injustice for me to begin with anything other than Farrah’s statements about feminism…

Do you consider yourself a feminist?
I’m pretty feminine. I think so.

Not feminine — feminist.
What does that mean, you’re a lesbian or something?

No, that’s not what I’m asking at all.
What context are you saying it in?

(This seemed like as good a point as any to insert a photo from this week’s Farrah Abraham bikini on the beach photoshoot.) 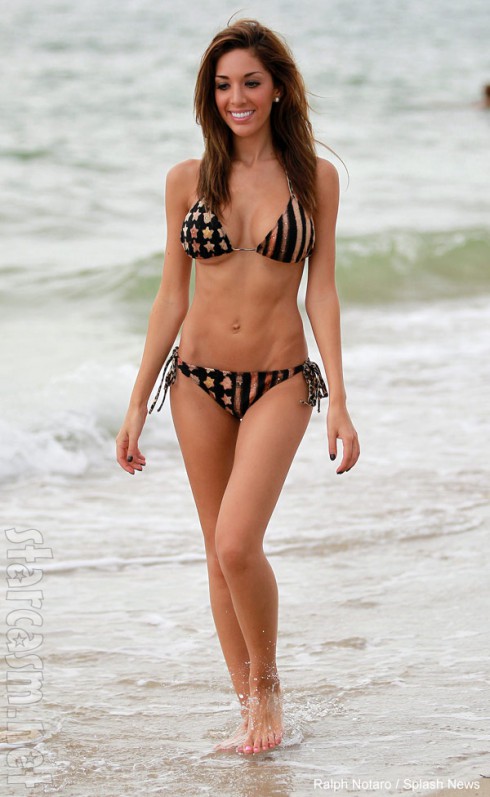 (Hmmmm… The stripes seem to be doing fine, but that bikini top needs a few more stars to handle Farrah’s enhanced, er, Teen Mammary. Alright, the bikini break’s over! I’ll now return you to the post already in progress…)

Farrah agreed to do the interview to promote the grand opening of Vivid Live, a new Miami strip club that’s owned by the same company that produced Farrah Superstar. When questions strayed from that original purpose, the Teen Mom star quickly grew perturbed.

“So was this not about the club at all? Because I’ll make sure to tell Jackie [from Vivid] that we didn’t mention any details,” Farrah said.

When the reporter then gave Farrah the chance to explain the club’s grand opening festivities, Farrah made a pretty basic statement and added “they put $10 million into it.” Apparently money specifics are a pretty big deal to Farrah, because she also got defensive when the reporter casually mentioned Farrah “made a million dollars” on her sex tape. The Teen Mom interrupted the reporter mid-sentence to say she made $1 million “or more.”

Even though Farrah didn’t seem too inclined to open up on her personal life, she was willing to chat about her Vivid tape.

Basically, how my sex tape came about is how I live my life. I’m 22, I’m very sexual, I’m single. A boyfriend of mine at the time, which was James [Deen], is in the industry and makes videos all the time, and so I thought it was a comfortable situation to have my only sex video with him. Proved me wrong, obviously, because it was leaking out, and I was starting to have people reach out to me. Maybe he did that because he wanted to promote his film at the time, The Canyons, which was coming out with Lindsay Lohan. So it turned into a hurtful chain of events, so I involved my lawyer. Other companies were reaching out and wanted to buy it, so I ended up selling it. And against all odds of everybody else telling me not to sell it, not to do it or whatever — it was already out, it was already going to be out there for free. So I made a business deal out of it. I’m smart, and I’m happy that I did that.

When the reporter later tried to wrap the conversation back around to Farrah’s tape, the 22-year-old said, “You know what, I’m just going to get off the phone, but I wish you all the best.” Meee-ow!