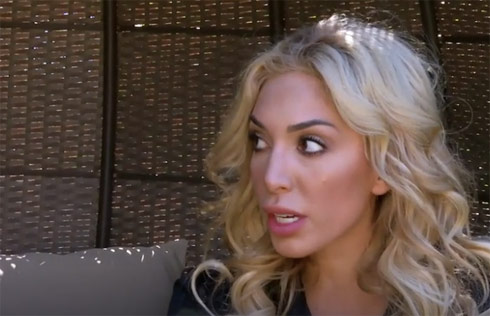 The next season of Teen Mom is almost here and we’ve got sneak peeks for each mom!

Amber Portwood gets a text from Gary Shirley informing her that he has decided to pick their daughter up because it’s a school night. Amber tears up as she explains to Matt and her friends that Gary has gone back on his word and that he wasn’t following their agreement in regards to being flexible.

Tyler Baltierra flops down on the couch and talks over his therapy session with wife Catelynn. He explains how the troubles with his dad Butch is causing him to become depressed again and he asks if she’s noticed. Catelynn’s unsure and then they agree that she often jumps to the worst possible conclusions with this kind of news and that her tendencies keep Tyler from wanting to share where he’s at.

Maci, Taylor, Bentley, Maverick, Jayde, Larry and Jen are all dressed up for Halloween but Ryan Edwards is running late. Ryan’s mom explains to Bentley that his dad’s stuck in traffic and he responds by saying, “he’s always late.”

Debra Danielsen takes a break from her rap career to discuss what her daughter’s plans are for therapy. Farrah Abraham, who’s perched like a queen bee in her backyard wicker thingy, is having none of it as she launches into a tirade about how everybody needs to work on themselves.