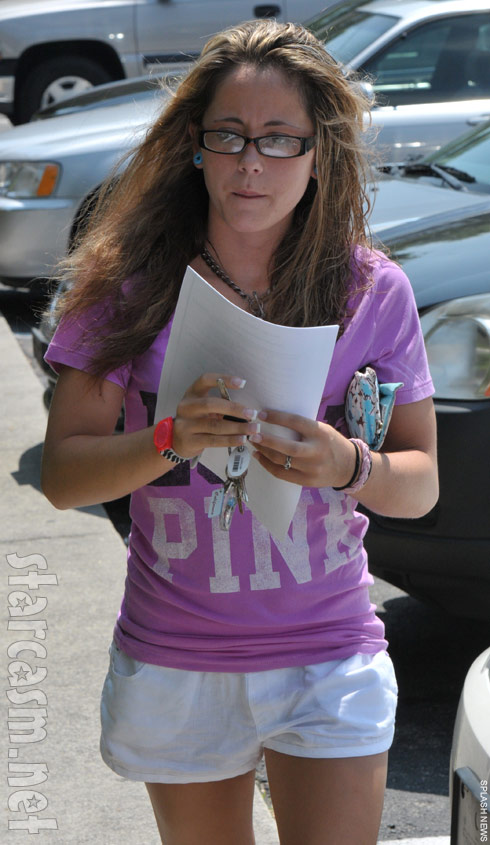 According to a July 15, 2011 probation violation report Teen Mom 2 star Jenelle Evans tested positive for THC (found in marijuana), has neglected to attend a mandatory rehab aftercare program, and is behind on court fees.

Here is a transcript of the violation report – you can download the pdf at Radar Online:

Of the conditions of probation imposed in that judgment, the defendant has willfully violated:

1. Condition of probation “Not use, possess or control any illegal drug or controlled substance unless it has been prescribed for the defendant by a licensed physician and is in the original container with the prescription number affixed on it…” in that

THE DEFENDANT TESTED POSITIVE FOR THC ON 7/13/2011 AND ADMITTING TO USING SAME.

2. Condition of Probation “The defendant shall pay to the Clerk of Superior Court the “Total Amount Due” as directed by the Court or probation officer in that

3. Condition of Probation “The defendant shall pay to the Clerk of Superior Court the monthly probation supervision fee as set by law” in that

4. Condition of Probation “… and participate in further evaluation, counseling, treatment or education programs recommended as a result of that evaluation, and comply with all further therapeutic requirements of those programs until discharged” in that

THE DEFENDANT WAS DISCHARGED FROM INPATIENT DRUG TREATMENT ON 6/7/2011 AND RECOMMENDED AFTERCARE/DISCHARGE PLAN WAS NOT FOLLOWED. SINCE THE DEFENDANT’S DISCHARGE FROM IMPATIENT TREATMENT SHE HAS FAILED TO FOLLOW UP WITH ANY AFTERCARE.

In summary, Jenelle tested positive for, and admitted to using, THC (marijuana), is $320 behind on her court fees and hasn’t attended any aftercare sessions post rehab. Individually those all sound fairly minor, but the combination of all three might put Jenelle in some hot water when she has her court hearing on August 24, 2011.

Her situation is only worsened by the fact that the media spotlight is on and every indication so far has been that local authorities want to make an example of the troubled, headline-grabbing teen mother of one. I hope they have something in place where there can be some sort of assessment of Jenelle’s progress and, if it is determined that she is doing way better (which it appears that she is), then maybe she will avoid having to serve jail time.

C’mon Jenelle! You got a lot of folks pulling for you! Get that check in the mail, pop in for an aftercare meeting and you gotta keep the weed at a distance!

UPDATES – TMZ has published photos of Jenelle brazenly partaking in what appears to be marijuana while a friend snaps away with a camera. The pictures were taken on July 17, just a couple days after she was found in violation of her parole.

Jenelle’s lawyer issues a brief statement in response to the latest development, saying “What I can tell you is that she is up to date on her payments and the probation officer has been made aware of this. As to the positive test, we would not be able to comment right now.”

Some more from Jenelle’s lawyer: “Jenelle is for the first time facing actual jail time. She could go to jail for 45 days,” after she tested positive for THC on July 13 and admitted to smoking marijuana.

“Jenelle is upset that the photos [of her smoking marijuana] were released and she’s concerned that this will affect her school. She is in school for the summer session and is going to enroll in the fall too.”