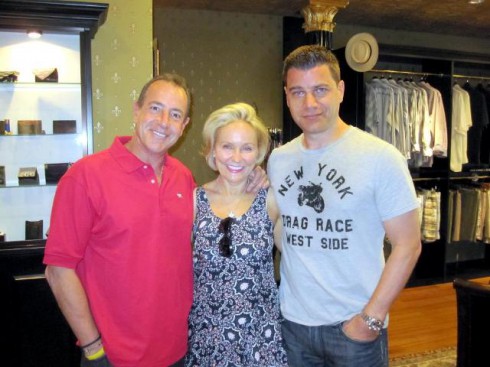 Michael Lohan, who can currently be seen gettin’ rehabed on Celebrity Rehab with Dr. Drew Season 5, is officially dating Kim Granatell, who is fighting for her life to be a regular cast-mate on Real Housewives of New Jersey.

They have possibly been dating since April, when they were photographed kissing on a yacht and discussing plans to launch a reality TV series about teen rehab. At the time it seemed to be most likely a publicity stunt, but if it is, they’re riding this one out long-term.

They were recently seen out together, and called as a couple by self-described “Celebrity Magnet” and Kim G.’s BFF Tom Murro (pictured above with the happy couple.) The three of them visited New Jersey clothing shop Something Sophisticated, and got an earful about RHNJ castmate Rich Wakiile’s assistant bullying them over a promotional partnership. Hop on over to Reality Tea to read more about that mess.

What Danielle Did To Dina And Why Caroline Was So Upset?