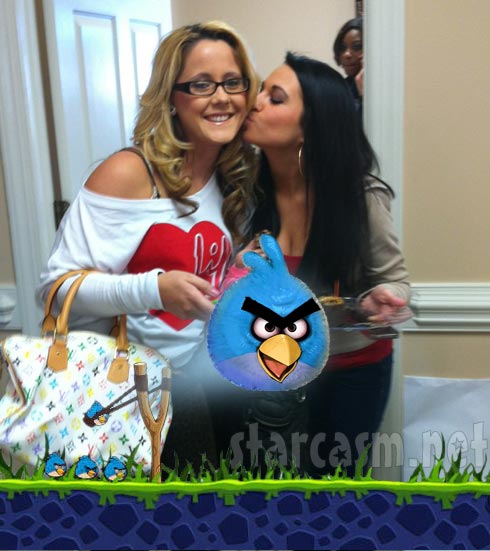 Teen Mom 2 star Jenelle Evans is having a bit of difficulty keeping a roommate. Last month she had a falling out with Amber Lane after issues with Amber’s boyfriend’s criminal past and Jenelle’s probation restrictions. (Amber would later tell her side of the story, including an appearance by Kieffer Delp, to In Touch.) And earlier today a huge Twitter battle broke out between Jenelle and her most recent roommate, Hannah Inman.

Given how difficult it is to get a sense of a timeline when looking at multiple users’ Twitter accounts I’ve compiled Jenelle and Hannah’s tweets in roughly the order they were written. The Twitter feud that started off on a bit of a sad note for Jenelle (which I am guessing when the two first had their falling out), but after a good night’s rest Jenelle had her virtual brass knuckles back on as she went Twitter Rocky on Hannah.

*** It should be noted that towards the end of their “conversation” Hannah decided to change her Twitter name from @baddbitcccch to @babybananaxo. I goofed up and refreshed the page before doing the screen caps so it may seem a bit confusing.

*** I will be doing a second post with a non-Twitter explanation of everything that went down from Jenelle. UPDATE – ALL DONE! CLICK HERE.

I think my favorite part is when Jenelle calls out Hannah for tweeting on a computer! (Which is how all us lame folks do it.) Since this whole debacle revolves around a cell phone, I think Jenelle should have called her “phoney” at least one time 🙂