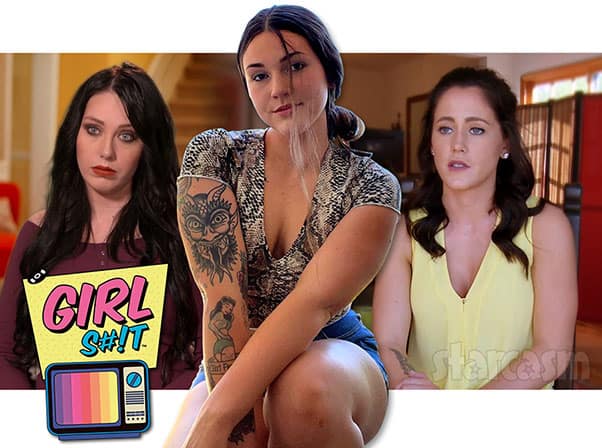 The fallout from the implosion of the infamous Girl Sh*t podcast that never was continues. Three weeks after a lawsuit was filed in part over claims that former Teen Mom 2 star Jenelle Eason was fired from the podcast, former Girl Sh*t participant Gabbie Egan is sharing her side of what went down — including a confirmation that 90 Day Fiance star Deavan Clegg told her (and many others involved with the project) that she was pregnant.

Gabbie Egan is a social media influencer most famous for her posts on TikTok. She and approximately 16 other women signed on to be a part of Girl Sh*t, a multimedia project with its central focus being a podcast. Jenelle Eason was one of the producers for the project, and she helped recruit many of the participants — including Gabbie and Deavan.

The project was announced on March 29 with a planned launch party in Chattanooga, Tennessee 2 days later on March 31. Many of the participants were in town for the launch event, including Jenelle, Deavan and Gabbie — all three of which were staying together at the same Airbnb.

As is always the case any time Jenelle announces any sort of new business partnership, the other Girl Sh*t participants were bombarded online with backlash for choosing to work with Jenelle.

YouTuber and Instagrammer John Yates revealed on the day of the scheduled Girl Sh*t launch party that Jenelle had reportedly been fired. He also said that Jenelle was asked not to show up at the launch party, but she and husband David Eason went regardless. They were denied access to the VIP section of the venue where the launch party was being held.

A federal class action lawsuit was filed on May 18 against John Yates and others with one of the plaintiffs being Jenelle Eason. In the lawsuit, Jenelle claims that John Yates stating she was fired from the podcast “was untrue and affected Plaintiff Eason and her business opportunities.”

More from the lawsuit:

Defendant Yates indicated that Plaintiff Eason was let go and was asked not to attend the event due to Defendant Yate’s comments on his live broadcast, and he stated that when she showed up to the event, she was denied access to the VIP area and was asked to leave or otherwise excused, which is not true.

There will be more on the lawsuit claims in a minute.

Gabbie shared two 10-minute videos on Instagram detailing her experience with the Girl Sh*t podcast and the project’s sudden, dramatic demise. (Full videos embedded below.) In the videos, Gabbie confirms John Yates’ claim that project participants were told on the day of the launch party that Jenelle was fired.

“The Girl Sh*t podcast pretty much ended as soon as it started. It was an entire sh*t show,” Gabbie explains early in Part One.

Gabbie says that it was her understanding that Jenelle was one of the producers for the podcast. She also confirms that it was Jenelle who recruited both her and Deavan to be a part of it. Gabbie drove to Chattanooga for the launch, and she shared an Airbnb with Deavan and Jenelle. Jenelle’s husband, David Eason, and daughter, Ensley, were also staying at the Airbnb.

I’m not oblivious, like, I know that Jenelle has a very controversial and checkered past. She has a bunch of sh*t that she’s done that I don’t agree with, and I’ve told her to her face, like, “Whoa, that’s some f***ed up sh*t,” you know? I like to give people the benefit of the doubt. I actively believe that Jenelle is changing into a better person. She has a very f***ed up past, yes. Same with David. But, the people that I met when I was working on this cast definitely weren’t the people that I read about in the media. Jenelle and David were completely different. They were very kind. They weren’t fighting. David wasn’t crazy.

In her second video, Gabbie iterated that David was very nice to her whenever they interacted. “He was nothing but kind to everybody. Yeah, David, I guess he can be a d*ck, but he wasn’t a d*ck while he was with us at all.”

The video does a cut as Gabbie realizes she should include a caveat in regards to her show of support for the Easons. “Does the fact that Jenelle and David are changing excuse their past? Absolutely not. But I feel like we should give everybody an opportunity to grow and learn from their past mistakes, and cancel culture is very toxic.”

Gabbie says that she, Deavan, and the Easons got along great for the first day she was in Chattanooga. Then, Jenelle started feeling sick and Deavan started reading up on Jenelle and David’s history. Tensions began to rise as Deavan tried to distance herself from the Easons — both by leaving the Airbnb and also by telling the other Girl Sh*t producers that she no longer wanted to be a part of the project if Jenelle was involved.

Gabbie says that Deavan eventually got her way. “The producers finally called Jenelle and [were], like, ‘Hey, you can’t come to the launch party.'”

More from Gabbie debunking Jenelle’s claims in the lawsuit:

People were telling [Jenelle], “You’re not coming to the launch party.” The main guy who runs the sh*t was, like, “you’re not coming.” Like, pretty much “you’re fired,” OK? Then, an email that John Yates leaked that Deavan sent in to John Yates, said pretty much that Jenelle had been let go from the podcast and she was no longer going to be a part of it.

Gabbie then confirms that security did not allow Jenelle into the VIP section of the venue where the launch party was held.

#TeenMom2 Jenelle Evans was reportedly fired from her Girl S#!t podcast one day after the announcement, but she & husband David tried to crash the launch party anyway. Was her firing because of #90DayFiance star and fellow Girl S#!tter Deavan Clegg? https://t.co/NTcFzLNvBw pic.twitter.com/C8EjQZ44VG

Gabbie on Deavan Clegg being pregnant

Here are Gabbie’s Instagram posts, including her videos as well as screen capped text message conversations with Jenelle and Deavan:

YouTube attorney Emily D. Baker recently featured the John Yates lawsuit on her channel, and she nearly sprained her neck shaking her damn head throughout. Here’s the video, which should be cued up to the beginning of Emily’s coverage of the Jenelle Eason and John Yates portion of the lawsuit:

UPDATE – More drama from the Girl Sh*t podcast fallout between Jenelle and Deavan:

#TeenMom2 Jenelle Eason shares her side of what happened during the Girl S#!t podcast implosion as part of her ongoing feud with #90DayFiance's Deavan Clegg. Get a full recap, including contract excerpts and text message receipts! https://t.co/zH9me0voFC pic.twitter.com/xS13dgAKmv

#90DayFiance Deavan Clegg says Jenelle & David Eason were "driving high and drunk" with Ensley in the car and LOTS more in a since-deleted video! Get a full recap with a nearly complete transcript! #TeenMom2 https://t.co/F9Sm9pAgOL pic.twitter.com/8kPwkbNd8B

90 DAY FIANCE Corey charged with DUI in Washington in November