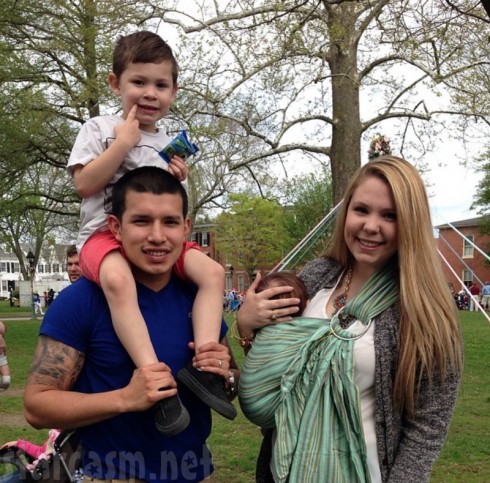 Teen Mom 2‘s Kailyn Lowry recently welcomed second son Lincoln, but is already thinking about plans for future family expansion. During a Google Hangout with the editors of OK! Magazine on May 9, Kailyn opened up about those plans — and shared one fairly uncommon option she’s considering.

“I’m open to one more,” Kailyn said, talking over her playing kids. “Three is enough for me.”

But, that doesn’t mean there’s only one more pregnancy in her future! Kailyn added she would like to “maybe become a surrogate for someone.”

On one hand, that news is somewhat surprising because Kailyn didn’t seem to have the most comfortable second pregnancy. (As seen on the last season of Teen Mom 2.) Then again, carrying a baby for friends who couldn’t otherwise do so would be an incredible gesture. And, considering Kailyn is a big supporter of gay rights, I can easily see her carrying a baby for a friend. In fact, she had a conversation about the topic with a friend on Twitter last July…

Now we know that was more than a passing thought! If Kailyn does become a surrogate, she would be in the small minority of women to do so. Although the statistics on the numbers of women who serve as surrogates are limited, one non-scientific poll for United Families International showed 65 percent of women would never consider being a surrogate while only 16 percent said they would. In another poll of 970 women for Cafe Mom, greater numbers said they would consider it if they were carrying for a friend or were getting paid “a lot of money.” Other research indicates the numbers are on the rise as there are greater demands for surrogate mothers and more women who are willing to serve in that role.

Side note! Kailyn seemed to confirm Teen Mom 2 Season 5B during the Google Hangout, saying we’ll see more about her relationship with Jo Rivera and Vee Torres “in the next part of the season.”