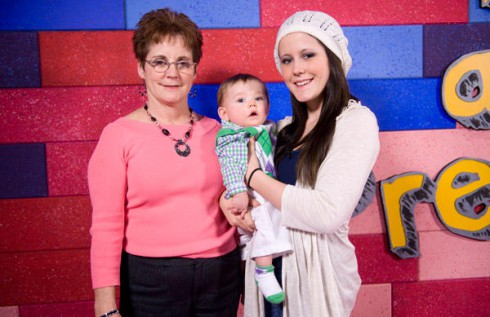 Teen Mom 2’s Jenelle Evans is no stranger to controversy; she admitted to smoking pot while pregnant, constantly disrespected her mom Barbara on camera, and made a habit of leaving her newborn Jace with Barbara (who works 40 hours a week at Walmart) so she could go out partying, and has been arrested several time (most recently for pot possession.)

Now we’ve learned that Barbara and Jenelle had a bitter custody battle over Jace (his father Andrew, a former model and alcoholic, is out of his life.) There is MTV footage (to be aired as part of Teen Mom 2) of Jenelle pushing her mother out of the door frame during a fight over Jace’s custody.

Despite Jenelle’s protestations, she did lose custody of her son to her mother Barbara Evans (57). On June 10 Jenelle signed over “primary legal custody and primary physical custody” to Barbara.

According to hollybaby.com, here are the stipulations of the agreement “The plaintiff [Barbara] is the maternal grandparent of the minor child. She is currently exercising physical control of the minor child by the consent of the defendants [Jenelle and her baby daddy Andrew Lewis, 25].”

Jenelle also reportedly ranted on Facebook that her mother was trying to charge her with multiple felonies.

It remains to be seen if Jenelle with face any penalties for shoving her mother on camera. Amber Portwood (of the original Teen Mom series) was recently jailed for a day after being charged with four felonies for physically abusing her baby’s father Gary Shirley on camera in both seasons of Teen Mom in front of their daughter Leah.

Add 16 & Pregnant and Teen Mom to your DVD library

Spare Parts: A dedication to the moms of Teen Mom 2