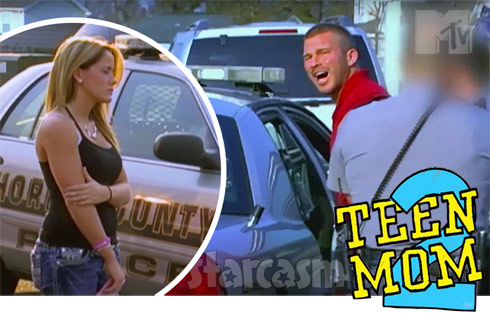 We’ve got a whole new batch of Teen Mom 2 preview clips for you, courtesy of MTV–and, just as you would expect, the mama drama remains a Category Five heading into Episode Seven, including an arrest, rehab, another arrest, and a pregnancy announcement!

This preview party gets off to an explosive start with video of Nathan Griffith being arrested for the domestic violence incident that made headlines back in March. The clip starts with a very heavily edited version of the 911 call placed by an MTV producer (you can listen to the full call, as well as the one placed by Jenelle, here), who reveals she heard Jenelle screaming “Get off of me. Get off of me.”

Next, we see Jenelle standing for photos of her alleged injuries for police. After that, police bring a VERY emotional Nathan Griffith out of the house in handcuffs and put him in the backseat of a Horry County Police cruiser; all the while, he pleads with Jenelle to “tell the truth” that maintains he “didn’t do anything.” His pleas go unanswered and he can be seen being driven off to be booked.
LEAH MESSER

Next up, we have Leah Messer (still Leah Calvert at the time), whose relationship issues continue with husband Jeremy Calvert. Leah makes the difficult decision to enter a “therapeutic treatment place”–she seems very reluctant to say “rehab,” or anything else that might indicate her issues are drug-related. She says that she hopes it will be “just kind of a reset button for my life.”

“I appreciate it,” Leah says. Jeremy continues channeling Dr. Drew, trying to make suggestions that will guarantee Leah gets the most out of her “therapeutic treatment place” stay. “When you go out there,” he advises, “don’t hold nothing back when they start asking you questions, even though it might upset you or make you cry. And don’t come back here holding nothing back.”

Leah then admits that she might come back “a completely different person” with a “completely different” mindset. Her comments seem to be her attempt to suggest the possibility that she and Jeremy could still work things out, but his response is not what Leah wants to hear.

“Well, even if you get help, Leah, I’m not changing my mind about the divorce,” Jeremy says flatly. Leah then gets emotional and frustrated, asking “Why do you get like this? I do not understand! Jesus.”
CHELSEA HOUSKA

It’s more custody issues for Chelsea, but this episode looks to have a bit of resolution, as a judge rules against granting Adam Lind 50/50 custody, further ruling that his visitations must still be supervised by his parents. Seemingly validating the judge’s wisdom, Adam was arrested after the hearing, due to an outstanding warrant for unpaid child support to his other ex, Taylor Halbur, for their daughter Paislee. (We were the first to report on Adam’s arrest after the court hearing back in March.)

Chelsea’s phone call to Cole DeBoer afterward pretty much sums it up: “So, it went really good, and they’re just going to keep it like it is, which is what I basically wanted. And he got arrested at the end because he had a warrant for his arrest.”

Here’s a screen cap of the moment just after Chelsea says that: 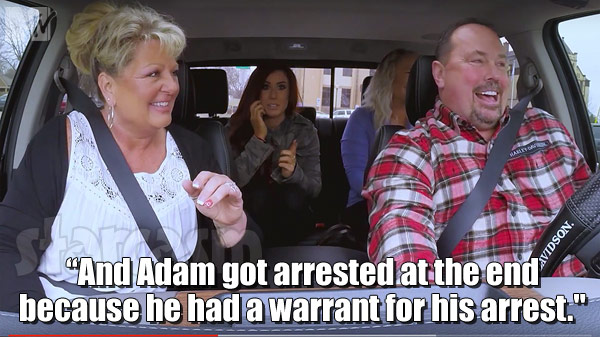 The clip then cuts to Adam after his release. There isn’t quite as much smiling; he comes to terms with the judge’s decision with his best bro Justin. He tries to come to Adam’s defense, but seems to sum everything up perfectly for #TeamChelsea. “All they have is to judge you by your record,” he says, of Adam’s rather extensive arrest history. “Chelsea doesn’t have a record, so they don’t have anything to judge her by.”

“Funny part is, I’m going to have Paislee all weekend, you know?” Adam says. “Taylor’s got a fu*king brain in her head, not hold my kid against me.”
KAILYN LOWRY

Jo reveals to Isaac that Vee is expecting a baby and he’s going to be a big brother again. Isaac’s initial reaction is pretty hilarious: “What the?! Uh, yeah, how about that?” He later seems to warm up to the idea, thanks in large part to some fatherly affection (and a smidgen of tickling) from Papa Jo.

And in case you were curious, Vee is currently 31 weeks pregnant with a little girl, and her due date is some time in late September or early October. Click here for her most recent baby bump photos and here for pictures from her pinktacular baby shower–in which it appears the name they’ve chosen for their daughter is revealed!

Be sure to tune in for this week’s brand new episode of Teen Mom 2, airing Thursday night at 10/9c on MTV!