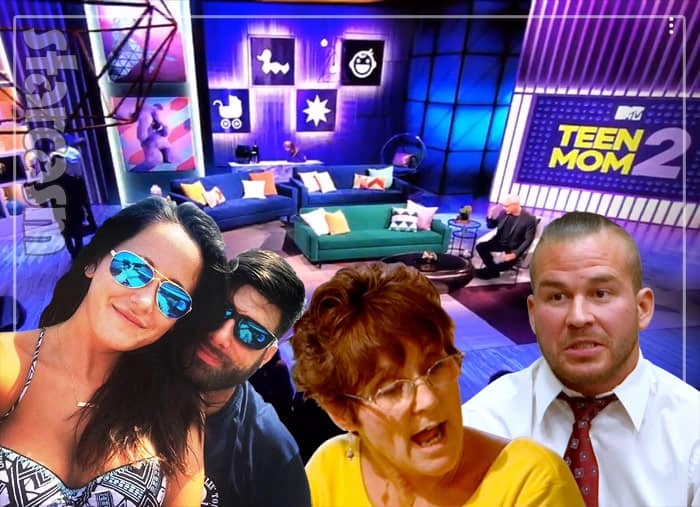 The Teen Momiverse is buzzin’ over all the reported drama from this weekend’s Teen Mom OG and Teen Mom 2 gathering in Los Angeles — with most of the headlines centered around Jenelle Eason. As we previously reported, she and husband David Eason were involved in a couple of backstage incidents, including one that saw an angry David pulling out a pocketknife and slashing balloons. But, the drama didn’t stop backstage, at least not according to one eyewitness account of Dr. Drew’s couch sessions with Jenelle, David, Barbara, and Nathan!

The firsthand recap comes via reddit (and imgur), and seems validated by all of the details lining up with other reliable sources like The Ashley’s Reality Roundup. Here’s a summary of all that went down with the Jenelle Easontourage:

Jenelle’s mother Barbara Evans was the first to record a segment, which she did by herself because Jenelle still refuses to film with her. According to the recap, Barbara continued to express concerns about David — his history of violence and the way that he seems to be in control of Jenelle. She reveals to Dr. Drew that her current issues with Jenelle are unlike all of the previous times they have fought in that they don’t ever make up. She says that the two would often make up soon after fighting before, but that is not the case this time.

Barbara also says that she still holds a grudge over the incident in which David and Jenelle crashed her Cinco de Mayo party and recorded her leaving the restaurant after claiming that they witnessed Barbara drinking wine while eating. The witness says that Dr. Drew did defend David at one point, and stated that perhaps Jenelle “needs someone to contain her.” (I hope for Dr. Drew’s sake that there is a context for his statement that makes it seem less controversial.)

Jenelle came out next, and she too was by herself. She confirms that she still wants nothing to do with her mom, outside of dealing with Jace’s custody, and claims that Barbara has recently sold stories about her to the media. Jenelle also says her mother is “addicted to wine.” 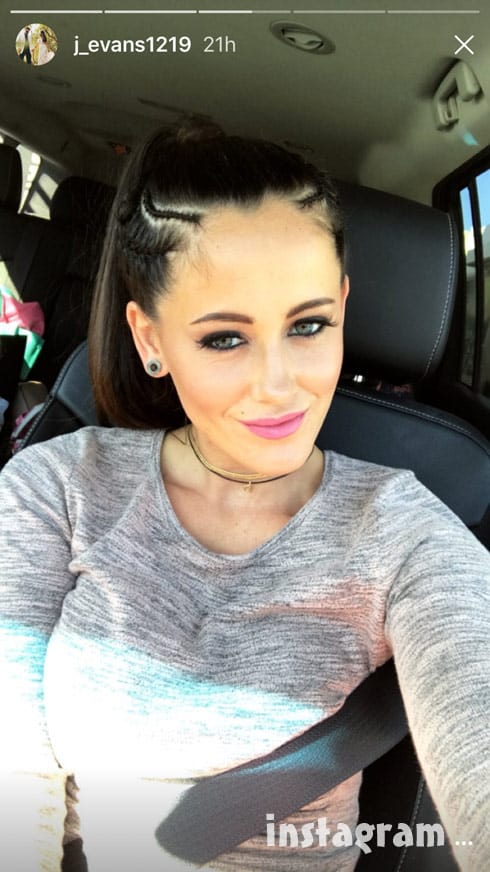 Jenelle defended David against Barbara’s claims and concerns over Jace’s safety, and she suggests that Barbara should be more worried about Nathan. Jenelle brings up the alleged bruises found on Kaiser’s posterior after he returned from staying with Nathan and Nathan’s mother Doris.

Producers and editing were next in Jenelle’s sites — a subject that recently led to her announcement that she plans on quitting Teen Mom 2. Jenelle insisted that her and David’s issues are simply trivial fights and that he is not controlling of her. She conceded that David does have a temper, but she pointed out that everyone has a temper and added that he is a nice guy.

Jenelle calls out Teen Mom 2 Executive Producer Morgan Freeman by name, and says that he does not realize how hard it is for her to watch her life being so negatively edited and then broadcast to the world. She says that the negative light she is consistently shown in has necessitated that she become more withdrawn — including deleting her Twitter account.

In addition, the bad editing has caused concern for her children’s well being, and Jenelle has had to deal with numerous viewers contacting CPS. She says again that she has received numerous visits because of the calls, and insists that CPS has not found any issue.

Just before wrapping up Jenelle’s segment, Dr. Drew announces that David Eason and Nathan Griffith will both be joining him next to talk about their issues.

In between segments, Jenelle was autographing items, like little Teen Mom rubber ducks, and tossing them into the audience. David motioned her backstage and then the two started packing up to leave! Producers attempted to convince Jenelle and David to stay, and their pleas were seen by Dr. Drew and the audience members on a video monitor on stage. Unfortunately, there was no audio, so it is unclear exactly what was being talked about.

So, the next segment featured only Nathan, who was asked what happened backstage. He said that David was upset over a comment made during Jenelle’s segment — it is unclear if it was a comment made by Jenelle or by Dr. Drew.

Nathan presents a plastic bag with a drug testing kit enclosed an explains that he had hoped to hand it to David and ask that he and Jenelle both take it.

Nathan insists that if Kaiser is suffering from any sort of abuse, it is while he is in the care of Jenelle and David. As an example, her says that the alleged posterior bruises on Kaiser were only brought up by Jenelle after Nathan’s mother Doris had already filed a complaint against Jenelle for “finger-like marks” on Kaiser’s back. Nathan cites the Save the Date photo scene, in which David forcefully grabbed Kaiser by the arm to get him away from the camera, as a perfect example of the kind of abuse that could cause those kinds of marks on a child.

But Kaiser is not the only person Nathan is concerned about. He says that he is also worried about Jenelle, adding that he has never known her to be so submissive as she is with David. Nathan says David has used numerous isolation tactics, including the purchase of property that is extremely isolated.

Meanwhile, Nathan’s mother Doris had not planned on making an appearance with Dr. Drew, but all of the drama and what was said motivated her to come out and sit with Nathan and share her opinion on the matter. She says she has a history in social service and knows the potential signs of child abuse all too well. She says she takes photos of Kaiser whenever they pick him up or drop him off with Jenelle and/or David, and mentions the court papers she filed in regard to the alleged abuse against Kaiser. 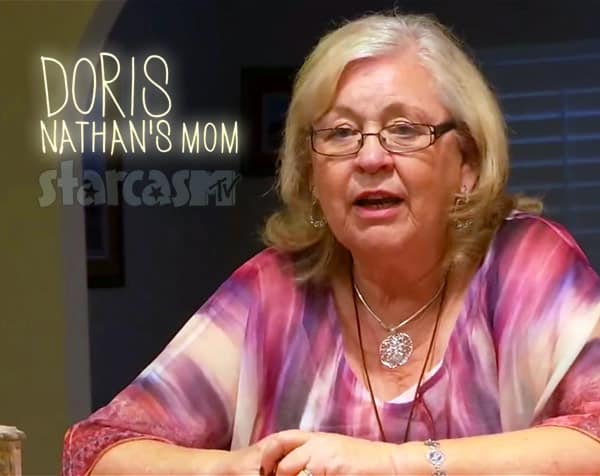 Adding to the allegations in her filing, Doris says that Kaiser once told her that David punched him in the head. She says she had Kaiser repeat it several times just to be sure. She insists that Kaiser told her “He punched me. David punched me,” while demonstrating by motioning towards his head. She says that she and Nathan have also called CPS, and reminds everyone that the matter has not been closed and that everyone has lawyers involved.

Doris was reportedly very emotional during her segment, and cried often. As she has admitted before, Doris is not the biggest fan of her son either. She says that he takes frequent trips to Florida with his girlfriend Ashley Lanhardt, before attempting to turn that negative into a positive by suggesting that her son’s absence makes it less likely that he is abusing Kaiser.

She says that she is very concerned that Jenelle and David may be using drugs and reveals that all parties involved had agreed at one point to taking drug tests. But, Jenelle and David backed out before following through. Despite all of the negative things she had to say about Jenelle and Nathan, Doris still believes that they can all work together to come up with the best situation for Kaiser.

Wow! It is hard to imagine they will be able to squeeze ALL THAT into half an episode! Could it be that this season will see the “Check In With Dr. Drew” divided into more than two segments? They need to do something new because of the addition of Briana DeJesus, right?

Meanwhile, MTV continues their rapid progression toward becoming Teen MoMTV with Teen Mom content airing 24/7 by adding two specials to next week’s schedule, including one titled “Jenelle vs. Barb.” The other is a sequel highlighting past Reunion drama titled “Reunion Madness Part 2.”

Leah Messer says ex Jason Jordan is ‘desperate for attention,’ denies texting Jeremy while they were together