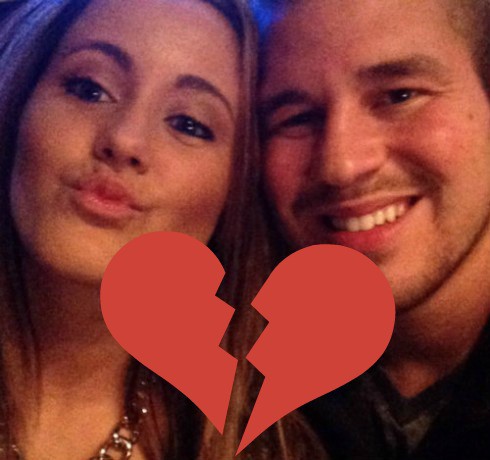 Uh oh! It looks like there’s some serious trouble in paradise for Jenelle Evans and fiancé Nathan Griffith. Just weeks after getting engaged, it looks as though the couple has had a serious falling out. Nathan made the announcement on Twitter stating, “I’m tire of constantly being disrespected and dragged down,” and then adding, “It’s public it’s official! Goodbye.”

Here are Nathan’s tweets from this afternoon: 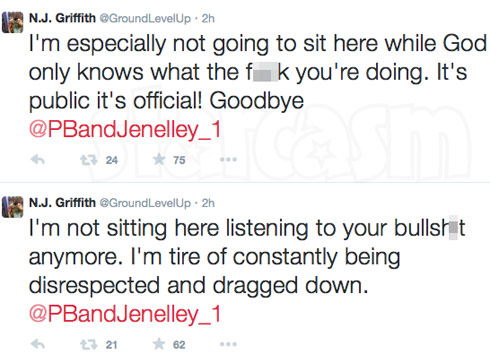 Although it is unclear exactly what happened that set Nathan off, Jenelle responded with a tweet that may provide some insight:

I’m guessing Jenelle wanted to visit her friend Kaylin (@kdub_910h) in Long Beach, NC, which is just over an hour’s drive from Myrtle Beach, and for whatever reason Nathan did not approve, or else wanted to go along. Someone on Twitter responded to Jenelle’s tweet suggesting that she was using the trip to visit Kaylin as an excuse to see her ex-husband Courtland, who is a mutual friend. That might explain why Jenelle then tweeted a text from her friend Tori about Courtland Rogers offering Tori $10 to pose for a photo with him: 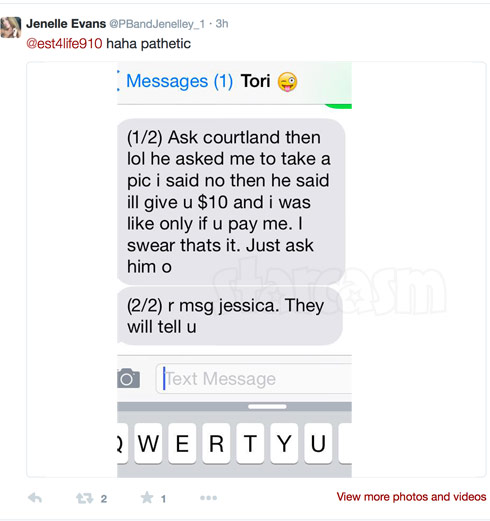 It appears that the photo they are referencing is this one, tweeted by Courtland: 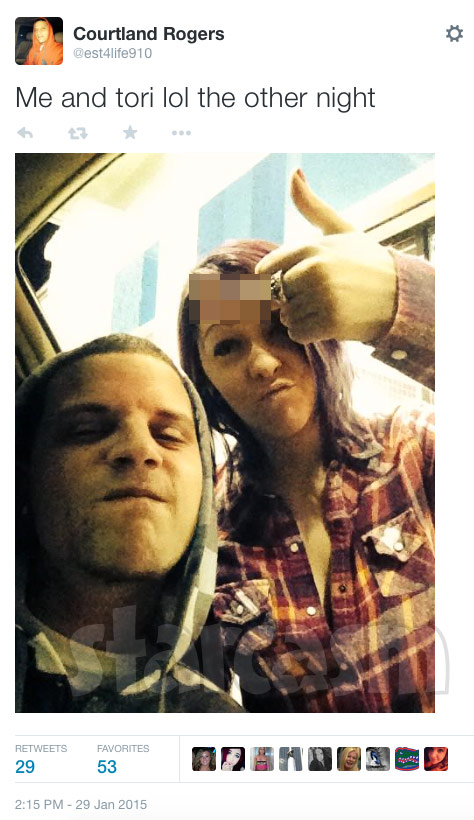 Courtland responded to the $10 photo Tori text tweet (are you following this?) by telling Jenelle, “it wasn’t like that with tori jenelle stop worrying about that.I was just like take some pics with me damn why u stress me.” Here’s how the conversation went from there, which includes a rather shocking confession from Courtland:

COURTLAND because I still .. Nvm

TWEETER u still love her huh?

COURTLAND honestly ?? Yes there I said it yes I still love her

COURTLAND with all my heart 🙁

COURTLAND how?? She hates me 🙁 there’s nothing I can do she would never that’s what hurts

Things have since gone relatively silent for now on social media. Jenelle tweeted and deleted a screen capped photo of a blonde woman in the shower wearing a bikini with Nathan’s comment, “I’ll show you how a MAN should be treated.” Jenelle wrote, “Oh really?” and tagged Nathan. There is also a photo that looks to be Jenelle’s naked posterior covered in bubble bath allegedly posted by Nathan on Facebook making the rounds — but I have no idea how it fits into this narrative.

Stay tuned. I’m sure we will know more soon.

UPDATE – We haven’t heard anything more from Jenelle or Nathan about the break up, but Kaylin did take to Twitter to address her connection to Courtland — or lack thereof:

@Lovexoxo26 @PBandJenelley_1 excuse you I am not a druggie & I do not associate with courtland at all. I have a job, a daughter, a family.

@est4life910 please let Twitter know we do not associate. Jenelle was not at my house trying to see you. We were just hanging out like we do