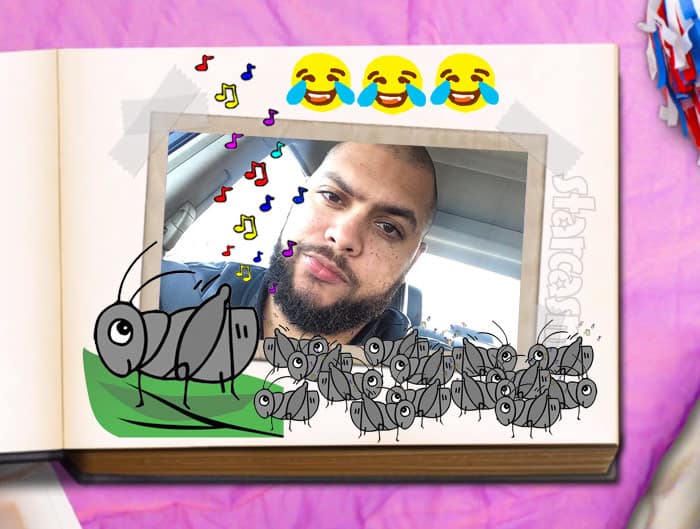 In the social media version of this season’s Teen Mom 2 Unseen Moments Special, star Briana DeJesus revealed on Twitter just how she got revenge on Luis after she found out he was cheating on her — and it is BIBLICAL!

In a long series of tweets, Briana tells the story of how she put more than 500 crickets in Luis’ apartment while he wasn’t there (she had a key), and then later put even more baby crickets! It’s not a plague of locusts, but 500+ crickets in a small apartment is pretty close! The storytelling session even included a video from Luis while his apartment was still crawling with crickets.

And crickets were apparently just the part that Briana was willing to fess up to. She mentions at one point that she “also put some other stuff in his house but I don’t want peta after me.” Later she posted a photo of a very non-wild looking large mouse or small rat with what I assume are text messages from Luis: 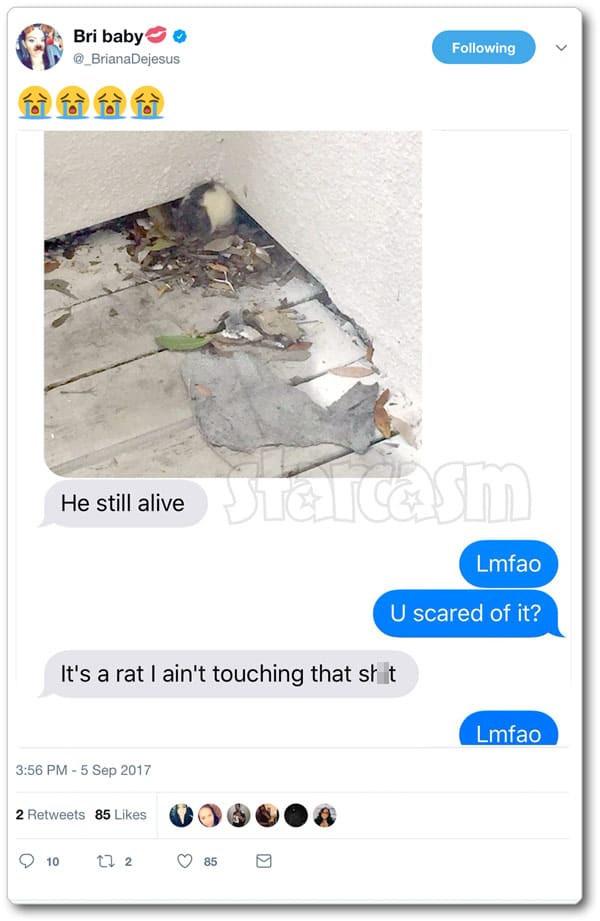 Unfortunately, it doesn’t appear that Teen Mom 2 viewers will get to see Luis being cricket punk’d as cameras weren’t rolling in his apartment during the swarm. They did capture a dinner conversation during this time, however, in which Briana could barely contain herself as Luis lamented the infestation.

Anyways, gather up your S’mores and we’ll sit around the virtual campfire together as Briana shows off her Twitter storytelling skills. (Briana tweeted everything except those comments preceded by “TWEETER.”)

TWEETER: Was it legal?

I had keys to his house and bought over 500 crickets and just let them free inside his room… ??

He still has no idea it was me but I guess he’ll find out now???

Then a few weeks later I went back and did the same thing but this time I used baby crickets ?

I remember we were filming at dinner and he’s like “omg there’s crickets in my house I couldn’t sleep last night, I had to vacuum them up”

And I’m crying like how the hell did u get crickets in ur house and he’s like IDKKKKKK??

And I’m like u know the vacuum isn’t going to do much they can crawl back out and he’s like “omg I didn’t think of that” ?????

I also put some other stuff in his house but I don’t want peta after me??????

So the whole time he’s saying how he was up alll night and mind u I’m crying tears like I couldn’t hold it in. I almost blew my cover up

Put let me tell u… 500 crickets in a small room is rough.. i felt bad cause it deadass sounded like I was in a Forrest ?

@mtv can u just send me the bloopers of him telling me the story at dinner ?????

What was even funnier is me trying to untie the bag with the crickets in it and throw It. A few landed on me????

And I remember him texting me photos of the dead crickets weeks later like “this sh!t doesn’t end, why me” ??????

It was so funny cause he had no idea it was me &I couldn’t even hold in my laughter and he’s like “why is that so funny To u, I can’t sleep”

TWEETER: Lmaooooo. Omg how long ago was this?

I don’t even remember. It was like right after I found out

TWEETER: Please tell me you still have the texts ?

I’m gonna look for them in my album

Hahahahahaha this is what he sent me weeks later I'm cryingggg all over again pic.twitter.com/vykAzJiZ04

TWEETER: That would have got me so heated… i can only imagine how annoying that was 4 him lol

Funniest part was that he just came home from the club..drunk ?

TWEETER: LMAO. Yo that is the best revenge ever. How’d he get rid of them?

He ended up moving out ?