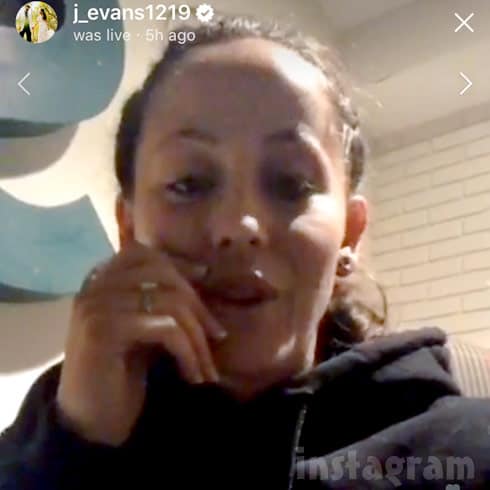 Teen Mom 2 star Jenelle Eason took to Instagram Live earlier today to explain exactly what happened at the Teen Mom 2 (and OG) “That’s A Wrap” party Friday night, during which her husband David Eason reportedly whipped out a knife and filled the streets (balloons) with uppercut. She also addressed the backstage fight that took place involving herself, David, Nathan, Nathan’s girlfriend Ashley, and, well, pretty much everybody.

We will start with the knife incident Friday night. The cast members of both Teen Mom 2 and Teen Mom OG were gathered together to film for a New Year’s Eve clip show special. The party included a bar, a couch where cast members took turns being interviewed during the party, an oversized Jenga game, and lots of helium balloons. “David was acting too drunk and the producers noticed it,” a source tells The Ashley’s Reality Roundup. “They cut him off at the bar. When David found out they wouldn’t serve him more alcohol he got super mad.”

Here is an exclusive behind-the-scenes photo from the party in which you can see David prior to the demise of the beer flow: 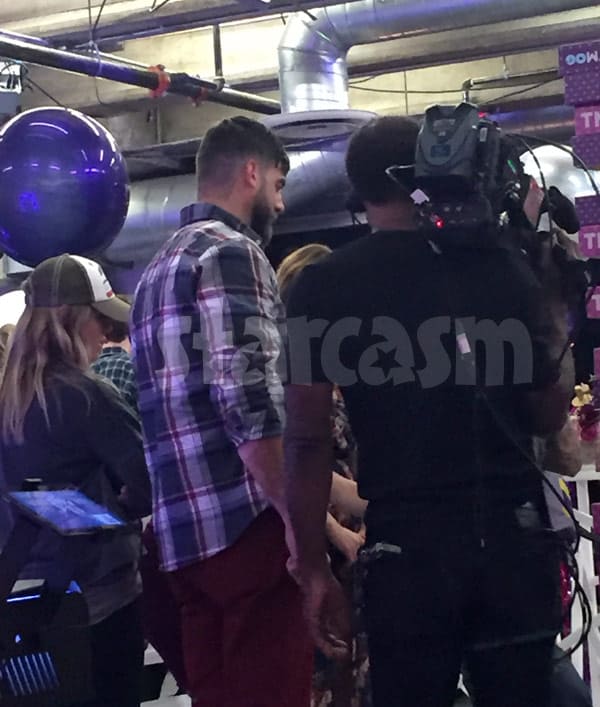 The Ashley reports that David “stormed off the staged area and ran into a big bunch of balloons.” Her source says David then “took out his pocketknife and started slashing the balloons with it!” Holy crap! What a balloonatic! (Sorry, couldn’t resist.)

Jenelle confirms all of the basic facts reported by The Ashley, but says it was over-sensationalized a bit. She says that producers were not allowing David to have any beer, so they decided to leave. “We were walking out and he popped some balloons.” That was pretty much all Jenelle had to say about the balloon slashing incident.

As a result of the balloonacy, The Ashley’s source says that before filming began the next day, cast members “had to go through a security checkpoint, get patted down and wanded and have their bags checked.”

Speaking of security concerns, before we get to Jenelle’s recap of the backstage drama on Saturday, I will share her explanation for why she and David decided not to stay with the rest of the cast at a hotel, and opted instead for an Airbnb house. Jenelle says she told producers that the Mandalay Bay hotel mass shooting in Las Vegas had her concerned for her safety. “That might could happen to us,” she said. She points out that Maci and Taylor had also opted to use Airbnb before, instead of staying in the hotel with the cast.

Jenelle further explains that Kaiser and Jace were staying at the hotel because it was their weekend with Nathan and Barbara and she could not dictate where they stayed. 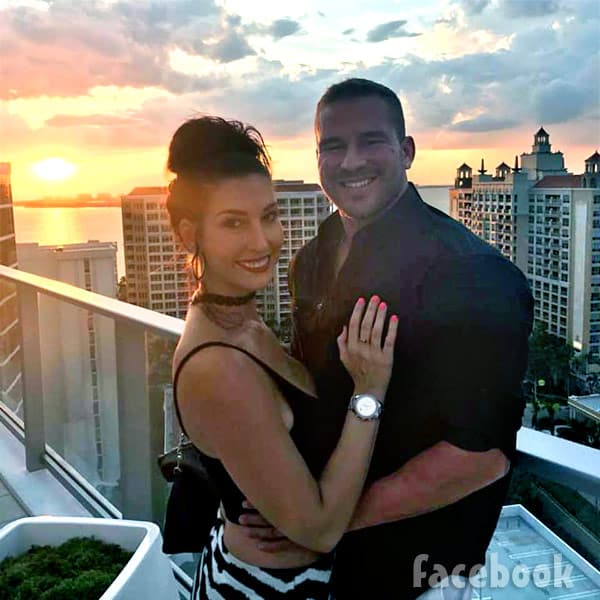 OK, on to the backstage Reunion drama. According to The Ashley’s source, “The fight started when Nathan’s girlfriend [Ashley Lanhardt — seen above with Nathan] was walking past the room Barbara [Evans] was in. Barbara hugged Ashley goodbye and Jenelle saw it and came bursting out of the room. She yelled at Barbara that it was wrong for her own mother to hug Nathan’s girlfriend.” From there, all hell broke loose. The Ashley’s source says that Nathan accused Jenelle of being high (which jibes with a Reunion recap from someone in attendance, who mentions that Nathan brought out a drug test for his interview), and Jenelle reciprocated by accusing Nathan’s mother Doris of being high.

Once again, Jenelle doesn’t seem to argue the basic facts reported by The Ashley, but her side does have a slightly different spin.

Jenelle concurs that it was a hug between her mother Barbara and Nathan’s girlfriend Ashley that started the whole thing. But, contrary to the report that she yelled her concerns at her mother, Jenelle says she saw the embrace and said of Ashley to her friend “She doesn’t even want to be filmed but look at her.” Jenelle says that Ashley overheard her comment and that it was Ashley that started the yelling.

Things escalated when Jenelle insisted on giving Kaiser (who was in a room at this point) a hug before leaving. As Jenelle went to the room to say goodbye, she says Ashley freaked out and had to be pinned to the wall. Nathan’s mom Doris was also against the parting embrace as she yelled at Jenelle: “This is our weekend, Get away!” (Fans of Teen Mom 2 might recall that it was a similar embrace by David of his toddler son Kaden, defying a protective order, that got him arrested back in March of 2016.)

I’m not sure of the timeline, but at some point Jenelle says she was so concerned for her safety that she called David, who was waiting in the parking lot. David came in, and the situation escalated even further. Jenelle says Nathan tried to “buck up” to David and yelled “Come fight me! Come fight me!”

Barbara was also going after David, and David told her at one point “I will pray for you.” Jenelle says that after hearing that, Barbara FREAKED OUT. Jenelle says her mom told her “You’re being abused and you won’t tell anybody — you’re worse now than you’ve ever been, even when you were on drugs!”

According to The Ashley’s source (and a witness), all the backstage drama was captured on film, so fans will eventually get to see it for themselves and decide who was most responsible for the escalation. Of course, Jenelle might argue that producers can edit the scene to make it look however they wish — which is why she has threatened to quit the show.

“I’m not comfortable sharing my life any more, unless it’s in my perspective,” Jenelle affirmed in her live video today. She says that Dr. Drew asked her why she felt like she didn’t have control over how she is portrayed when it is within her power to control what she says and does while cameras are rolling. “The producers create drama with their questions,” Jenelle explained, adding that they can push and prod her enough to get the negative reactions they want. “I know I’ll be happy whether the show goes on or not,” she says of her potential departure. 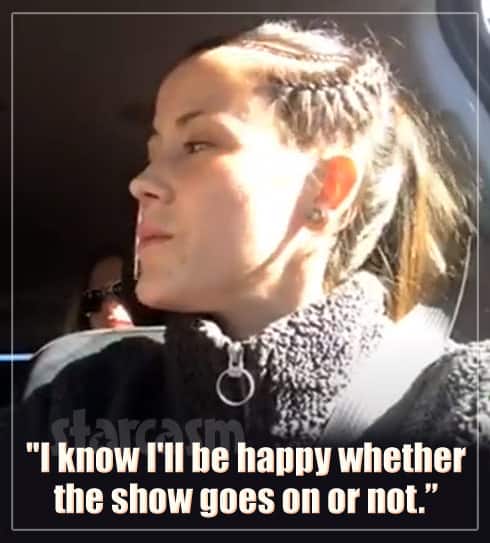 In addition to the party and the backstage confrontation with Nathan and Ashley, Jenelle also talked about her relationship with her Teen Mom 2 co-stars Kail Lowry, Leah Messer, Chelsea Houska, and Briana DeJesus. Surprisingly, especially given their history of conflict, Jenelle and Briana have grown close. She says they bonded over the fact that “the other girls want to go sell stories about me and Briana.”

Such a sweet soul!!! I’m so happy we’ve met and connected in a way we both can relate to each other. You’re such a great mother and this show will get tough but you’ve got this. ????? #Slay #NewFriendships @_brianadejesus

Jenelle and Kail have recently had a very public falling out, and it was reported that Jenelle had sent Kail a message prior to the Reunion instructing Kail not to even try to talk to her. Jenelle confirmed that report during her live stream.

Fans might recall that Jenelle, Briana, Leah and Kail were all together at this year’s MTV Video Music Awards, and both Jenelle and Briana say that they were getting along well with Leah at the time (see photo below). But, something changed prior to this weekend. “Me and Leah were cool and all of a sudden she was two-faced to me,” Jenelle says. She adds that Briana had a similar experience with Leah and didn’t understand why she was nice at the VMAs but not at the Reunion. 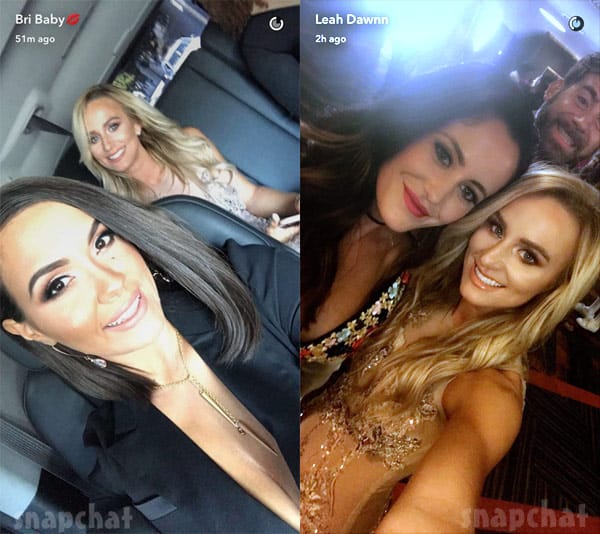 So what about Chelsea DeBoer? Jenelle simply says “Chelsea stays out of it.”

Unrelated to the Reunion drama, Jenelle also addressed the recent rumors that she is pregnant again by saying “Hell no!” in response to people asking if she will be having any more children. She says she is considering having her tubes tied.

OK, I think that should get you all caught up on the Jenelle Eason Teen Mom Reunion drama! Of course, there is probably lots more to come, so stay tuned! (We are currently working on a recap of all of the Jenellentourage’s appearances with Dr. Drew based on someone that was there.)

UPDATE – Click here for the latest on the Reunion drama from Nathan, his girlfriend Ashley, and Randy Houska?!