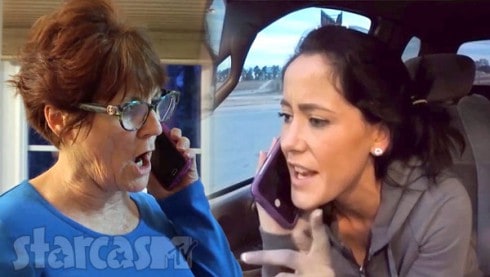 Does the new Jenelle Evans app have a “get attorney Dustin Sullivan on the horn” emoji!?!

A police report verifies that Jenelle Evans called the police on Mother’s Day weekend when her mom, Barbara Evans, denied her visitation of her son Jace.

Boiling Springs Lake Chief Brad Shirley told Radar, “We received a call that there was concern about the welfare of the children in the home….For whatever reason the grandmother did not want to honor that visitation schedule.” He added that it was “an estranged time for visitation with Jenelle’s son” that prompted the call.

Jenelle Evans tweeted about her heartbreak over not seeing her son the weekend of May 12-14:

On Mothers Day I won't have him. I'm torn. https://t.co/XddSLHyvDf

Was mad for too long then turned into tears the rest of my night 😞 https://t.co/Cgsxund61F

She ignores my calls and texts and took Jace and hid from me all day in her house locked up. No lie. https://t.co/jJoYXYGk3R

Babs gave Radar her side of the story:

I did not want to let Jace see her. Jace did not want to go with her. I told Jace and another grandchild to just hide in the house. She came over and banged on my garage and windows for a full hour. She was going ballistic. I thought ‘Jesus Christ, she’s going to break my windows…’ The kids were hiding in the bedroom petrified.

Barbara went on to state that Jenelle eventually called the police and told them that Barbara had “a mental illness.”

Meanwhile, Shirley provided a detailed explanation of what happened from law enforcement’s perspective:

We made contact with Grandma immediately and determined this was a civil matter and that the concerns needed to be taken to the judge. This was nothing law enforcement needs to get involved with, it was a custody dispute. As the property owner, she [Barbara] has a right to dictate who can be on that property. Both parties were given advice and were told what could happen if the situation escalated. This could be considered trespassing and it doesn’t matter what the relationship is. If you don’t have the rights to a residence, you could be trespassing.

Jenelle’s fiance, David Eason, was listed alongside Jenelle as an “others involved” in the redacted police report obtained by Radar.

Shirley noted that Jenelle complied with the request for her to leave Barbara’s property, and that no arrests were made.

On May 25 Jenelle and Barbara worked out a new custody arrangement that still recognizes Barbara as the primary guardian while giving Jenelle more visitation time.

Briana DeJesus, Kail Lowry won’t be at Teen Mom 2 Reunion, Jenelle might miss due to health