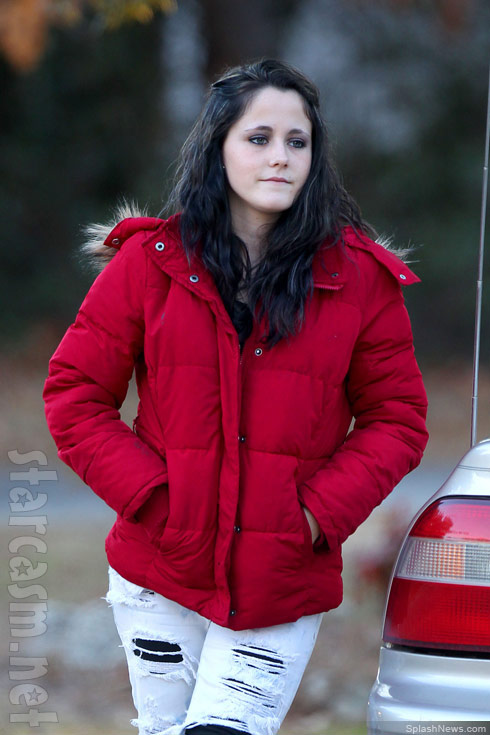 In this week’s issue of OK! magazine a friend of Jenelle Evans reveals that the Teen Mom 2 star hasn’t been completely honest about the identity of the father of her one-year-old son Jace. 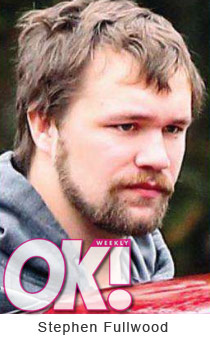 During her episode of 16 and Pregnant we were introduced to Jenelle’s alcoholic former model boyfriend Andrew Lewis and told that he was the feisty teen’s baby daddy, but Jenelle’s “confidant” Kaylin Zorich tells OK! that the more likely candidate is Stephen Fullwood (right), who was seeing Jenelle’s best friend Tori Rhyne at the time he allegedly hooked up with Jenelle. (You can see a video of Jenelle and Tori puffing on a “homemade cigarette” HERE!)

“Tori still doesn’t know to this day that Jenelle hooked up with Stephen,” Zorich tells the magazine. “Jenelle thinks Jace’s father might be Stephen, but she doesn’t want Tori to get mad at her.”

In an apparent failed attempt to get straight, Andrew went to rehab. That’s when the alleged hook ups happened between Jenelle and Stephen, who worked together at an Irish pub in Southport, North Carolina.

“He went off to rehab, and then he got out and she was pregnant. The whole time he was away, Jenelle was at Stephen Fullwood’s house every day,” Kaylin says. 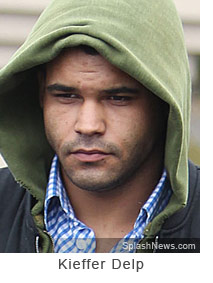 Jenelle’s current boyfriend, Kieffer Delp, also talked with OK! and seemed to back up what Kaylin was claiming. He remembers a text message from Andrew on Jenelle’s phone that read, “Who else would be man enough to sign that birth certificate after we tried to get you pregnant, and I go away for a month and you pop up pregnant?”

“She won’t have a DNA test because she doesn’t want to know,” Kieffer reveals. “She and Stephen were not an item. She’s still a little in love with Andrew. She hopes he’s the dad. She wants to think after all that time with Andrew, he’s the one.”

As you might expect, none of this made “foul-mouthed firecracker” Jenelle Evans very happy and she responded in her usual way – with unwise posts on Facebook! The revengefest began with Jenelle posting Kaylin’s phone number and encouraging her thousands of fans to “give her a call.”

The post received hundreds of comments, most of which condemned Jenelle for posting someone’s personal phone number in a public forum online. (And a lot of whom claimed they called the number!) Of course that did little to change Jenelle’s stance as she chimed in occasionally with her own opinions:

that b*tch HAS DONE THAT TO ME. she is trying to sell stories about me. 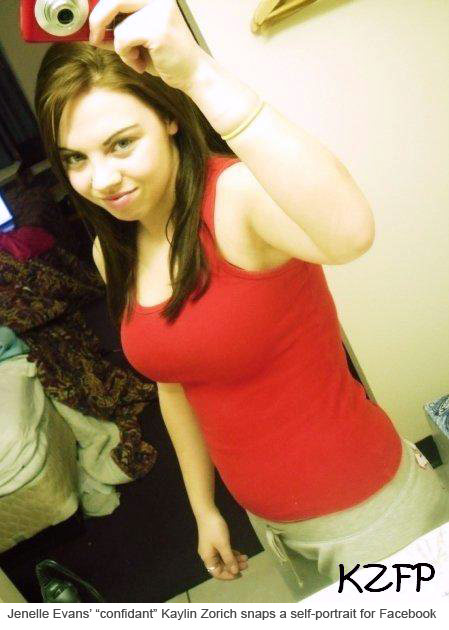 Kaylin Zorich stepped in to defend herself and her comments to OK! by writing:

i didnt do her dirty i just told the truth 🙂 the truth hurts.

As you might imagine, Kaylin’s words lit Jenelle’s fuse and she exploded with:

haha watchhh outtt kaylinnnn. :] caitlyn said its about to be on for round 3. 😀

and no kaylin, yr a filthy little b*tch that shaves off her eyebrows to “make yrself look better” when really yu look like complete sh!t. then yu have to draw t…hem b*tches on with a sharpie. yu have stolen all my clothes and makeup in the past. yu start sh!t with EVERYONE here in brunswick county. no one fu**ing likes yu. yu dont kno sh!t about me. go ahead and tell them magazine ladies WHATEVER yu want to.. doesnt phase me. dont fu** with me cuz i fu** harder and lets see whats going to be in there next week about yu. :]

There’s the Jenelle we know! I’ll be “quiet” and let the drama play out (with a lot of the non-Jenelle comments edited out of course)

Jenelle i rather be a pothead then a heroin addict and shoot that sh!t up my arm.

Commenter ‎@ jenelle what is wrong with you?? it is illegal because its an invasion of someones privacy and harassment. i would think you would know that with all of your bouts with the law. and this just goes to show how much you really care for your fans. you dont, the only person you care about is yourself.

Jenelle whats wrong with me? hahahaha, if yu only knew how much sh!t this little girl talks and cant back it up. ^^^^ see that girl Cait up there.. she has fought that kaylin girl twice becuz she cant stfu.

kaylin needs to worry about her probation… then being obsessed with my life. invasion of HER privacy?! WHAT ABOUT MY PRIVACY SHE IS SELLING AWAY TO THE TABLOIDS?! ohhh, but i dont matter in this situation. jenelle is just the stupid bitch in this situation i guess.

Caitlyn Martin [Jenelle’s friend] wat u mean whatz the truth? everything kaylin said to that magazine is a lie jacez father is andrew,kaylin did that because she dont like jenelle she is so jealous of her,ive beat her a$$ 2 timez already cus she cant keep her mouth shut about anybody,kaylin is a drama queen i think everybody shud leave jenelle alone because she has enough to deal with,everybody getting on here and taklin about her doesnt make it better wether u like what she does or not she has feelingz

Kaylin Zorich my family owns bussiness’s out the ass. weve worked hard to have money. weve come along way. and i havent even got any mmoney yet. just some cupcakes and thank you cards and job offers.

Kaylin Zorich its not false thats why shes so pissed and she ccalled me saying i should have remorse for tellin the truth. keiffer went missin last night to go drink with ok magazine to betray jenelles as well hollywoodlife.com is making a story about keiffer now.

Kaylin Zorich i didnt want oney i wanted thr truth about jenelle out becuz she betrayed me and fu**ed me over for the last time. ive known her for years. its personal sh!t she crossed the line.

Kaylin Zorich i got a check in the mail from another magazine.. a nice ass check. 🙂 money talks. and i am only telling the truth.

Soon after Jenelle posted Kaylin’s phone number someone started up a “Team Kaylin” Facebook fan page on which Kaylin voices her views on Jenelle. (The hate and vitriol seem to be held at bay by the moderators)

But that wasn’t the end for Jenelle! She did some old school journalism and dug up a mug shot of Kaylin Zorich that looks to be scanned from a newspaper! (As a celebrity blogger very familiar with mug shots, I have to tip my hat to Jenelle on that one!) The mug shot caption says “Kaylin M. Zorich – Shoplifting.” Here’s the photo followed by Jenelle’s caption and comments: 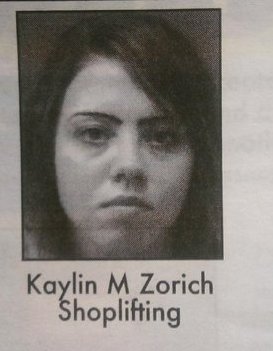 CAPTION: mmmm.. sooo i “have a bad past” according to that “friend” of mine who sold me out for money.. but she doesnt?! i think NOT! look what i dug up. :]

Commenter shoplifting is a lot better than smoking weed when you should be changing diapers.

Jenelle and not to mention violation of probation for failing a drug test which tested POSITIVE for heroin. stayed in jail for 20 days.

Jenelle ive never been in actual JAIL in my life. just in the holding cell for a couple of hours.

Jenelle she doesnt have a child no but still heroin is a nasty drug and can give yu STDs from using other people’s needles. i guess yr telling me ashley that i should shoot heroin rather then smoke weed? hahaha, stupidddd.

Kaylin Zorich YEAH JENELLE I DID STEAL. LIKE YOU NEVER HAVE??? ITS THE ONLY CHARGE I HAVE BESIDES 2 SPEEDING TICKETS. YOU WERE TELLING EVERYONE THAT I WENT TO JAIL FOR A PROBATION VIOLATION FOR HERION……. NOT TRUE I ACTIVATED MY SUSPENDED SENTENCE SO I DIDNT HAVE TO PAY $235 A MNTH FOR PROBATION FEES. BIG DEAL. I DID THE CRIME & I DID THE TIME. SOOOO WHAT???? 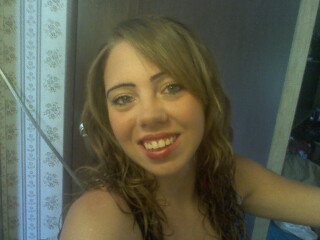 Jenelle then posted a request on her wall for someone to start an anti-Kaylin Facebook page:

Can someone make an anti kaylin page please? Thanks 🙂 send me a msg on my personalfb once u do and I’ll make u admin of my fanpage

That brought on a new onslaught of comments including questions asking why Jenelle was trying get someone else to do her “dirty work” and why was she even bothering with Kaylin at all, to which she responded:

Jenelle Lol I’m not trying to get anyone to do my dirty work I would do it but I’m on my iPhone and I can’t :/ and why bother?! Becuz if u only knew how much drama she has caused with not only me but with all my friends. That’s why she has no frien…ds where we live. That’s why she got her ass beat numerous of times. This drama started way back before the show even started before MTV even found me. She stole my clothes, tell yr secrets to everyone, steals everything and anything from yr house, seals jewelry from her grandmother and pawns it which was her great great grandmothers jewelry, fu**s yr exs, fu**s yr current bf, has sex infront of her friends at parties, addict to hardcore drugs, see the list can go on and on and lots of people can preach to this.

That’s where it ends… for now! Stay tuned because (I can’t believe I’m saying this) Jenelle is just as entertaining off screen as she is on and who knows what will happen next?!?

Anyone out there close to this mess who wants to offer up your side of the story? Drop us a line at starcasmtips (at) yahoo.com!