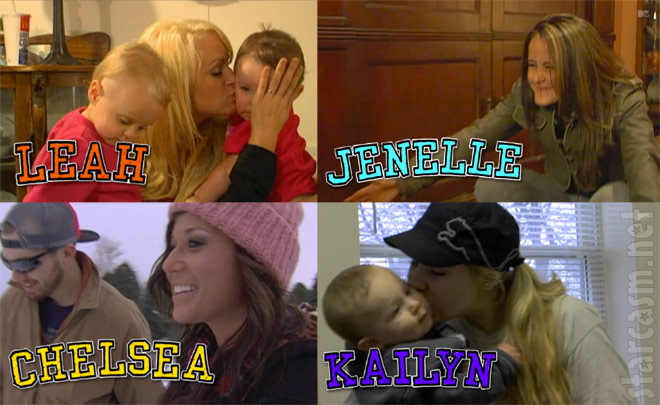 Last week we shared the first 30-second commercial for the upcoming second season of Teen Mom 2, and now we have the full two-minute preview trailer with lots more of what we can expect from Leah Messer, Chelsea Houska, Kailyn Lowry and Jenelle Evans!

Here are some of the bullet point moments from the trailer:

• One of Leah’s twins takes her first steps (I believe it is Aleeah – thanks fans!)

• Kailyn gets in a car accident

• Aliannah has to have an MRI of her brain

• Adam and Chelsea continue their fighting, leaving Chelsea wondering, “How could I like him so much and he likes me not at all?”

• Jordan gets a little jealous of Kailyn’s time with her ex Jo after it appears that something may have happened between the two. (Kailyn to Jordan about her and Jo: “Things went a little further than they should have.”)

• It appears that Corey is saying Leah “cheated on him again.” (although Leah has stated on Twitter that things aren’t as they seem in the clip so we should seriously wait and see on that one!)

• Jenelle and her mom Barbara have another huge falling out after Barbara spots Jenelle and Kieffer together again.

• An emotional Leah says she filed for divorce from Corey

• Jenelle heads off to rehab in California

• Aubree does the “Mommy passed her GED test shuffle” with Chelsea