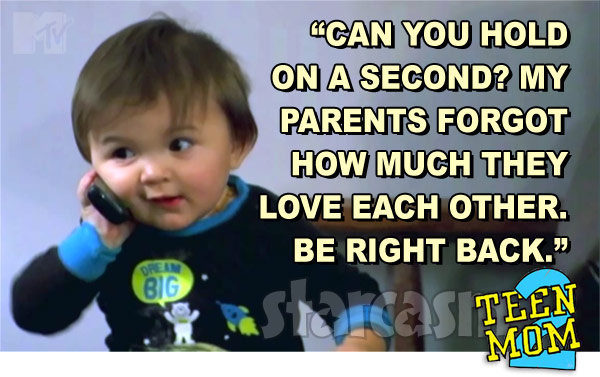 We have a brand new batch of preview clips for this week’s episode of Teen Mom 2! Here are the four clips — one each for Kailyn, Leah, Chelsea and Jenelle — with the clip titles and descriptions:

KAILYN LOWRY “Where Are We Going Wrong?”
Kailyn and Javi discuss reaching a breaking point in their marriage.

Kail and Javi (in a blanket!) continue to talk about their relationship issues, and it continues to be a “chicken and the egg” debate: Does Kail not want to spend as much time with Javi because when they do spend time together all they do is fight, or do they fight whenever they spend time together because Javi is hurt that Kail doesn’t want to spend as much time with him?

“On the weekends I want to be with my friends,” Kail explains to Javi. “You need constant affection and attention, and you need to be included in everything, and I’m not like that.” Javi points out that Kail used to be like that, but he says that now, when they do find time for each other, all they do is fight. Kail agrees.

Eventually, Lincoln comes in and steals the show with his cuteness (above) and Javi admits he can’t imagine his life without Lincoln and Isaac and that he wants’ to find an answer to their problems. (Well played, Lincoln!)

LEAH MESSER “A Plea for More Time”
Leah resists Corey’s plan to have the girls spend more time at his house.

Leah and Corey meet to talk about Corey’s proposed 50/50 custody split, and it becomes quite clear that Corey doesn’t trust Leah to take care of the kids. “If I have them for that extra little bit, that’s an extra little bit that I don’t have to worry about it,” he tells Leah of his concerns about their daughters being on time for school and physical therapy. “I don’t want you to take this the wrong way, but that’s time that I don’t have to worry: ‘Are they tardy?’ or ‘Are they late?’ Or ‘Are they there, or are they not?'”

Corey isn’t laughing. “This is what she said. She said, ‘Cause my mommy’s a sleepy head, and I have to make myself breakfast.’ Whenever your child says that, and she can show you how to make toast in a toaster to back up what she said, that’s hard!”

CHELSEA HOUSKA “Aubree Acts Out”
Chelsea receives some unpleasant news when she picks up Aubree from school.

Just a couple of days after returning from spending time with Adam’s parents, Aubree gets into trouble at school for scratching a classmate. (WHAT?!? NO, not Aubree!! Maybe she was framed?) Chelsea tries to convince her to apologize.

Jenelle’s mom Barbara comes to visit her new house for the first time, and conveniently, Nathan is not there. After Jenelle gives Barbara a brief tour, tensions begin to mount when Barbara says Jace acts up in school after each visit with Jenelle and Nathan. The volume goes up, and the potential for anything productive goes waaaay down, as the focus of their argument shifts to Jenelle’s frustration that Jace refers to Barbara as “mom.”

The new episode of Teen Mom 2 airs Thursday night at 10/9c on MTV.