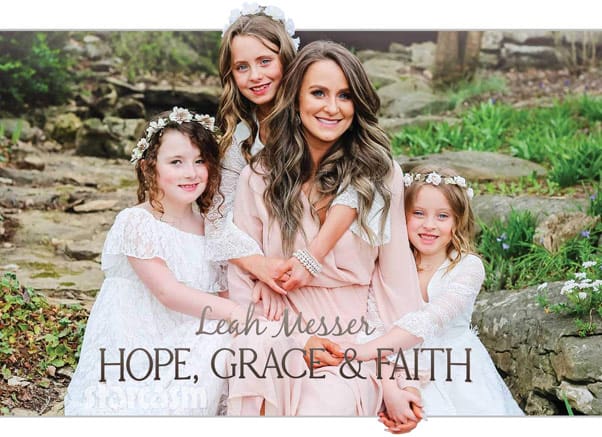 Teen Mom 2 star Leah Messer’s new book Hope, Grace & Faith comes out on May 5, but impatient fans don’t have to wait thanks to The Sun receiving an advance copy and essentially posting chapter-by-chapter recaps online. The recaps and excerpts from the book detail numerous shocking revelations from Leah’s life, including her abortion cover up, a near-suicidal 110 mph drive caught on GoPro cameras by MTV, her years of “blacked out” drug addiction, and being sexually abused by her babysitter when she was five years old.

I will start with the description of Leah’s book from Amazon, and then I will provide a brief recap of the parts of the book that have been revealed online.

“It took hitting rock bottom for me to realize that if I wanted something better for my girls, I had to learn to love myself first.”

Leah was first thrust under the reality television microscope when her teen pregnancy was documented on MTV’s groundbreaking series, 16 and Pregnant. Since then, fans of Teen Mom 2 have watched her life play out on the small screen—from her struggle to rise to the challenges of motherhood, through her harrowing journey to find a diagnosis for one of her twin girls with a rare form of muscular dystrophy, and the collapse of two marriages. She has learned to live under the harsh glare of media scrutiny, yet there is a truth behind the reality that the cameras have never revealed.

In her unflinching and honest memoir, Leah takes readers behind the scenes and shares an intimate, often heartbreaking, portrait of her turbulent childhood in rural West Virginia, the rock bottom that forced her to reevaluate her life, and her triumphant break from toxic relationships and self-destructive cycles to live her life with hope, grace, and faith.

As if that episode wasn't bad news enough for Leah, she reportedly suffered a miscarriage http://t.co/nKKaY9jr #LotsaLoveFor @TM2LeahDawn

Viewers of Teen Mom 2 will recall that Leah got pregnant by Jeremy Calvert soon after they began dating in the wake of her split from Corey Simms. As shown in Season 4, Leah’s pregnancy ended in a miscarriage.

Here’s the scene from the episode in which Leah tells Jeremy that she lost their baby:

Here's the video of Leah faking her miscarriage on #TeenMom2. pic.twitter.com/L9MfIKarzy

It is confirmed in Leah’s book that at the time that she got pregnant, she and Corey both were having second thoughts about their split. “I was devastated. Having a baby with Jeremy would be the end of any chance Corey and I had of making things work for our family,” Leah writes. “I was sad for myself, but mostly I was sad for our girls. I knew I had f**ked up, and I felt like I had ruined their lives on top of mine.”

Leah hatched a plan, with the help of her rep and her mother Dawn, to have an abortion and tell everyone — including Jeremy — that she miscarried.

According to Leah, she took pills she received from a clinic that triggered cramping and heavy bleeding. Dawn called Jeremy to let him know. “When she told him I was having a miscarriage the way she played the role of concerned mother was so damn convincing even I couldn’t tell she was lying,” Leah recalls. “I remember listening to her talking to Jeremy on the phone and wondering how the hell I had let this happen.”

Leah herself called show producers later that night, and they rushed over to film — including the scene above with Jeremy.

“I can look back now without regret, but for the longest time, I wasn’t okay with the choice I had made,” Leah says of her decision to fake the miscarriage. “It felt so dark because it was hidden.”

She eventually told Jeremy the truth, but she doesn’t know if Corey ever found out.

The Sun article: COMING CLEAN Teen Mom Leah Messer admits she lied about miscarriage with ex Jeremy’s baby – and really had an abortion

At 23 years old, Leah was dealing with the failure of her second marriage, her daughter Ali’s muscular dystrophy diagnosis, and a serious drug addiction. Making matters worse, Leah was living with her dad, who also had drug addiction issues, at the time. As an attempt to help Leah “just take the edge off,” her dad gave her a Lortab.

Instead of taking the edge off, the pill resulted in Leah almost going off the edge — literally! She says in her book that her next memory after taking the painkiller was driving with her foot “pressed down on the gas.” Leah says she remembers reaching 110 mph as she approached a “steep cliff off the side of the road.”

She remembers thinking how easy it would be to end things, and how “everyone would be better off.” Thankfully, Leah hitting rock bottom didn’t equate to her literally being at the rock bottom of a ravine as she opted to pull over to the side of the road instead.

“A lifetime of tears comes pouring out of the deepest part of my soul,” Leah says of the moments parked on the roadside. “I cry so hard I wonder if I’ll ever be able to stop. Then a thought cuts through the deafening static in my brain: My daughters need me.”

The GoPro cameras in Leah’s vehicle must have been recording because she had a voice message from executive producer Larry Musnik when she got home expressing concern over the footage.

After continually refusing to go to treatment for her drug issues, the driving incident was enough to change Leah’s mind as she finally agreed to go to rehab.

There were reports of Leah being suicidal back in 2015, but she called them “unbelievable” at the time. “I am far from being suicidal because my girls need me happy and healthy!” she tweeted, adding the #craziness hash tag.

The Sun article: ‘NO MORE PAIN’ Teen Mom Leah Messer claims she attempted suicide by driving off a cliff – and scary incident was caught on MTV cameras

Leah’s drug abuse issues were documented extensively on Teen Mom 2 — eventually. But, as bad as Leah seemed on screen (slurred speech, nodding off, and more), things were much worse in reality.

Leah says her drug problems started when she was prescribed painkillers Hydrocodone, Oxycodone and Tylenol 3 after a “botched” spinal tap during the C-section birth of her and Jeremy’s daughter Addie in 2013. That confirms a report from a family insider back in 2014. (However, a source later revealed to The Ashley’s Reality Roundup that Leah’s opiate problem started well before Addie was born.)

Leah was also taking Diazepam at the time for her anxiety.

#TeenMom2's Leah Messer admits to using painkillers, cheating with Corey Simms when they were remarried. https://t.co/LkjNLbEcY1

“A lot of that period of my life is just a blackout to me,” Leah says. “Even though people will tell me I did things. I don’t remember, or I’ll watch footage of myself on the show and have no memory of it.”

She says that her mother Dawn and stepdad Lee were helping her attempts to stop taking the painkillers, but her live-in dad “pressed a couple of pills” into her hand.

Leah would eventually agree to go to rehab, but only after the near-death driving experience mentioned above.

The Sun article: DULL THE PAIN Teen Mom Leah Messer confesses she ‘blacked out’ for years during painkiller addiction 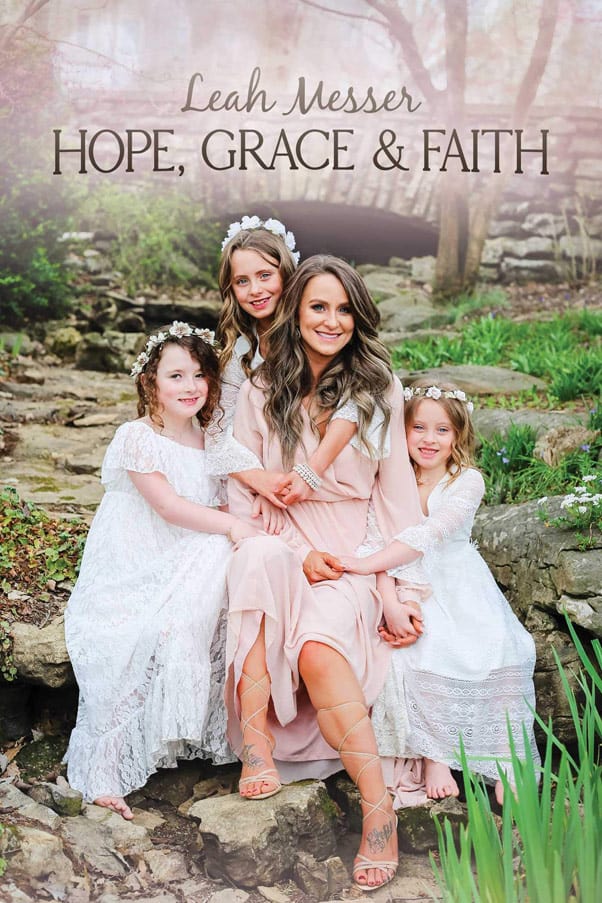 When Leah was five or six, she says that she was sexually abused by a teenage girl that would babysit for her. “She would put on a movie and as soon as her mother left the room, she would kiss my neck and touch me where no one should ever touch a child,” Leah writes. “I didn’t like what she was doing. It felt wrong, but she was the only one in that house that was nice to us. I was afraid that if I told her to stop, she wouldn’t want to hang out and play games anymore.”

Leah didn’t tell anyone about the abuse for years because she was ashamed and felt partly to blame. “I stuffed the memory down so deep it was almost as if it never happened,” she confesses.

It’s unclear if Leah, or anyone else, has confronted the babysitter about the abuse allegations.

Leah Messer’s book Hope, Grace & Faith will be released on May 5, and it is currently available for pre-order on Amazon.

UPDATE – Leah just uploaded a clip to Instagram excitedly opening up a box of copies of her new book!

My publisher sent me some books and I can’t put into words how proud and excited I am! I wanted to share this moment with all of you! #HopeGraceFaith #linkinbio #hopegracefaith #aaa #myreasonforliving #motherdaughter #girls #girlmom

Leah Messer says ex Jason Jordan is ‘desperate for attention,’ denies texting Jeremy while they were together