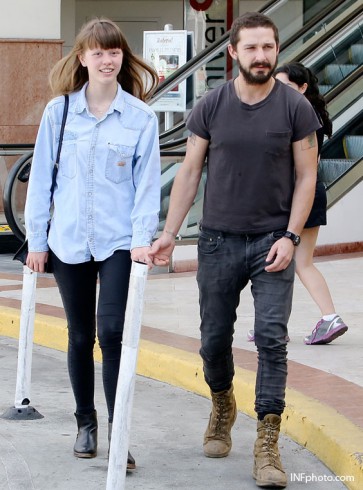 In a video Entertainment Tonight released, Shia LeBeouf is seen fighting with his girlfriend Mia Goth a German airport, and later taped saying “I would have killed her,” and then Facetiming Megan Fox.

“I don’t want to touch a woman, I don’t want to hit a woman, but I’m being pushed,” LaBeouf tells German locals who offer him a ride during a fight with Goth. When she comes to the car, she takes him backpack and begs him not to go. Goth is currently staying in Germany to shoot A Cure for Wellness.

“I don’t wanna touch you. I don’t wanna be aggressive. This is the kind of s— that makes a person abusive,” he tells her when he tries to get his backpack back.

“If I’d have stayed there, I would have killed her,” he tells his new companions. They discuss guns, and Shia tries to FaceTime his Transformer’s costar Megan Fox. When he’s dropped off at the airport, Shia invites his chauffeurs to visit his L.A. home anytime.