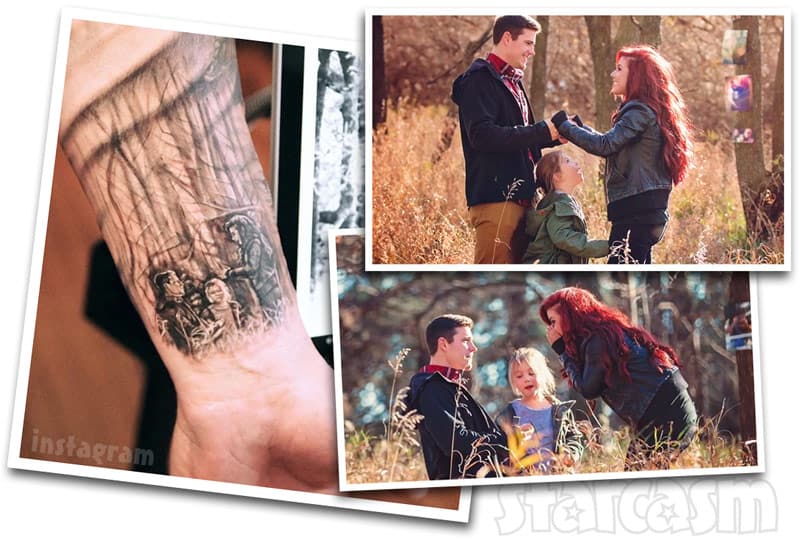 Teen Mom 2 viewers are well aware that Chelsea’s husband Cole DeBoer wears his heart on his sleeve, but now he also wears it on his wrist thanks to a brand new tattoo!

Cole shared photos of his latest ink, which was taken from a photograph of his romantic rustic proposal to Chelsea that also included her daughter Aubree. “More additions from the master artist himself @robbie_portfolio51 ?????? ??,” Cole captioned a gallery of images of his new proposal tattoo, as well as a separate tattoo of an eagle he got on his other wrist. “The scene of me proposing to my beautiful wife @chelseahouska and one badass eagle!!!!”

Here is the gallery of images from Cole:

More additions from the master artist himself @robbie_portfolio51 ?????? ?? the scene of me proposing to my beautiful wife @chelseahouska and one badass eagle!!!!

And an extended look at Cole’s forearm and the new tat: 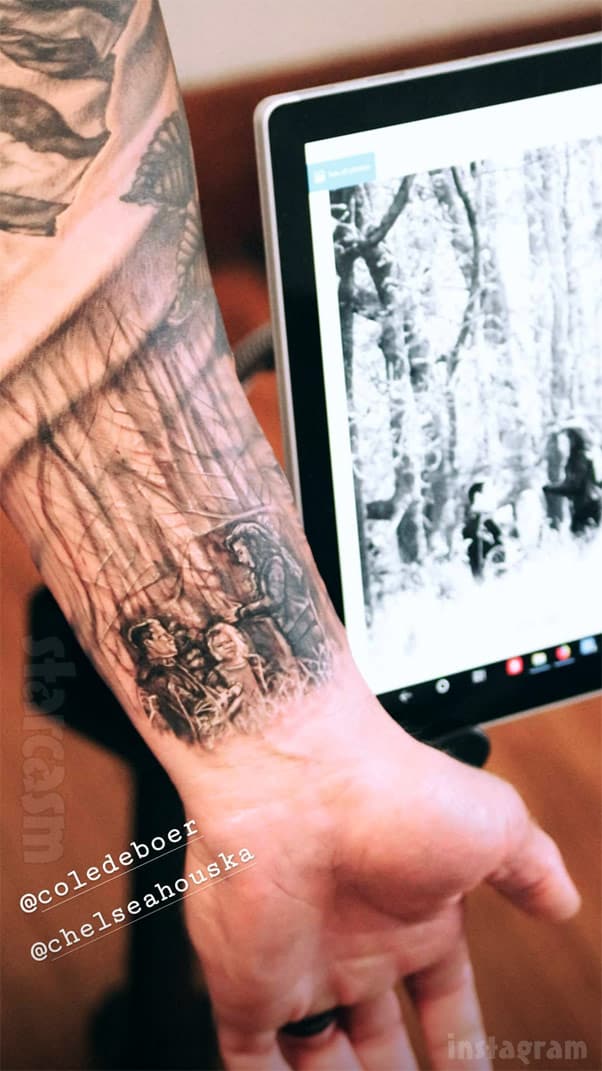 Unfortunately, I was unable to track down the exact photo used for the tattoo, but we do have some very similar ones taken by professional photographer Tyler Jacobsen. Here are a few of those: 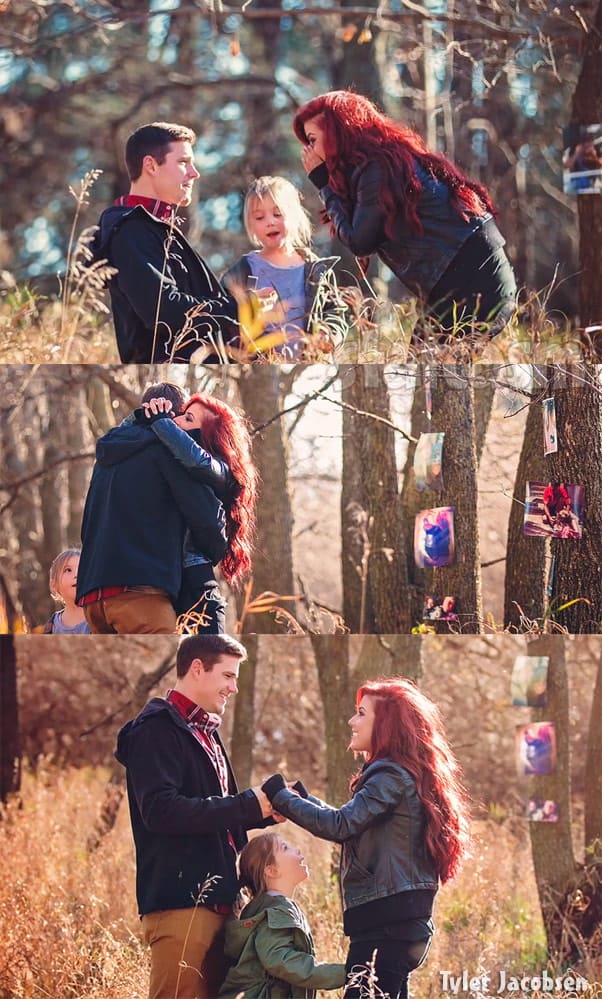 I'm so so happy @jakephotographysf was there to capture this amazing moment in November ? i am so blessed with such an incredible man @coledeboer ?

Chelsea and Cole talked about the proposal in a beautiful professional video about the couple’s first year together done by AJ Production company (included below). “I said I was going deer hunting,” Cole recalled. “I actually did go for a little while,” he confessed.

“Yeah. Only for like an hour,” he replied. “And then I crawled down and I set all my stuff up. I nailed all these pictures to a tree…and then I just did it in an area under my tree stand out there in the woods.”

Cole then talked a little bit more about the set up and how he managed to get Chelsea and Aubree dressed up. “I remember I told you I wanted to ‘go check my game camera’ to see if I had any ‘pictures of deer.’ And then, I said we have to dress nice because we’re going to go to dinner afterwards. And you were so confused! You were, like, ‘No. It’s Sunday, and we’re relaxing.'”

“You kind of black out for a moment,” Cole said of the actual proposal. “Like, I don’t remember everything once I hit my knee. But, it’s like your heart is beating so fast — it’s like an adrenaline you’ve never felt before. But yeah, it was amazing. And I think the setting made it just — being outside, and a bunch of trees around you, it was just perfect.”

Cole stated that he also got a “badass eagle” tattoo, so I feel obligated to include a couple photos of it for those devout Cole tattoo-ologists out there: 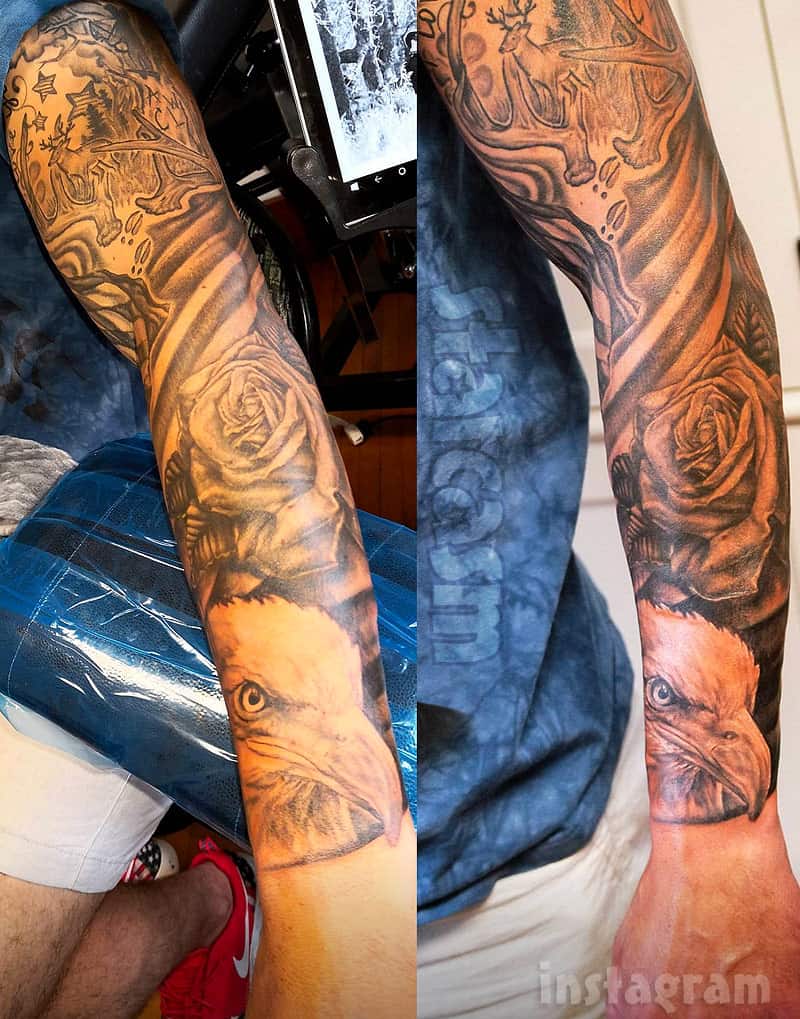 I mentioned the video documenting Chelsea and Cole’s reflections on their first year together, and I think it is the perfect way to end this post.

But first, let me say congratulations again to Chelsea and Cole on their fairy tale happily ever after! I’ve been writing about reality television for more than a decade and I really cannot think of a better relationship rags-to-riches story than Chelsea’s. Both Teen Mom OG and Teen Mom 2 serve as a kind of “choose your own adventure” guide for teen parents, and Chelsea is without a doubt a shining example of making the right decisions — even if it took a while. Just think back to the situation Aubree was born into, and look at the loving and secure home and family she has now. Patience, love, and self worth are a beautiful thing, and thankfully Aubree’s mother has all three.

I don’t know where to even start complimenting Cole and how he has handled the role of husband, stepdad, dad, Old MacDonald, and reluctant reality TV star. I guess I will just say I admire him for all of those things, and especially for agreeing to share his life on the show so that young men (and women) can have an example of what to look for in a significant other. There are way too many people without that kind of example in their lives, and it is certainly not easy to find on reality TV.

Ugh, I’m starting to think maybe I will get a tattoo of Cole’s proposal! ?