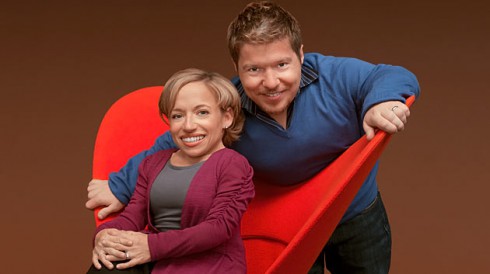 The stars of TLC’s The Little Couple have a big task ahead of them: Raising a child!

Dr. Jennifer Arnold and Bill Klein announced they adopted a three-year-old boy from China who, similar to them, has a form of dwarfism.*

“We are thrilled to announce that we have adopted a beautiful young boy from China,” the couple said in a statement to People. “We are so proud to welcome William to our family and look forward to bringing him home.”

The road to parenthood has been long and challenging for the couple. After exploring the risks of pregnancy for 3′ 2″ Arnold, they decided it would be best to look into other options.

“After 6 months of doctor visits and much soul-searching, we both decided that it would not be in the best interest of our baby or myself to try to carry a baby due to the health risks of my short stature and skeletal dysplasia,” Arnold wrote in a 2011 blog post for TLC.

Arnold, who was 35 at the time, said they were first pursuing surrogacy as an alternative because of her age. Unfortunately, even surrogacy was complicated by the fact that Arnold and Klein both carry single genes for skeletal dysplasia. Specifically, Arnold wrote that a baby with double-dominant dwarfism would likely die shortly after birth. Thanks to wonderful science, however, the doctors would be able to determine if an embryo carries the lethal double-dominant dwarfism condition before it would be implanted in the surrogate.

“The goal of the testing is to prevent our surrogate, her family, and us from going through a nine-month pregnancy with a baby that cannot survive,” wrote Arnold, who also works as a neonatologist.

Knowing that there was only a 25 percent chance of double-dominant dwarfism and that there was an alternative to carrying the baby to term, Arnold and Klein decided to give it a go. Tragically, even though an implanted embryo appeared to be healthy, the surrogate mother suffered a miscarriage.

As the difficult experience played out on the most recent season of The Little Couple, Arnold and Klein discussed adopting a child with special needs.

“My entire life, even before I met Bill, I always thought, ‘Oh, I’d love to adopt a child who is another little person,’ ” Arnold said in an episode that aired last March. “And Bill and I talked about it after we got married, and I think we both realized we both would like that.”

Now, five years after they married, it sounds like Arnold and Klein are finally getting their wish. And, who better to raise a child with dwarfism that two empowered, confident little people? Congratulations to the family!

Watch Arnold and Klein’s emotional and exciting journey on the upcoming season of The Little Couple, which premieres April 30 on TLC.

UPDATE April 2013: Here’s a clip of the couple talking about the process and seeing a photo of their baby for the first time:

*Corrected from an original typo. We all make mistakes.