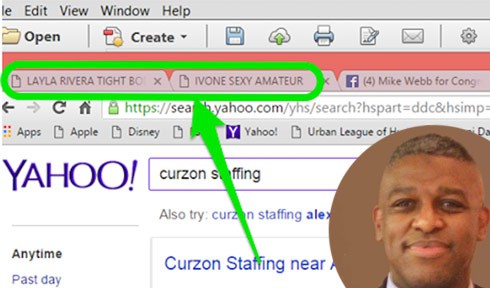 Mike Webb, who is running for U.S. Congress in Virginia, probably should make himself a little more familiar with how the World Wide Web works.

Webb likes to post screen grabs of what he’s researching to Facebook so that his constituents can know that he’s focusing on the issues that matter to them. In a recent share, Webb revealed that two particular points of interest were, “IVONE SEXY AMATEUR” and “LAYLA RIVERA TIGHT BOOTY.”

Webb left these tabs up in his cap and got called out for it mercilessly. But fear not voters of Virginia, Webb had a detailed explanation as to why he was checking out Ivone and Layla:

Curious by nature, I wanted to test the suggestion that somehow, lurking out in the pornographic world there is some evil operator waiting for the one in a gazillion chance that a candidate for federal office would go to that particular website and thereby be infected with a virus that would cause his or her FEC data file to crash…

Okay, we’re gonna stop there because it just gets weirder and more difficult to understand. You can check out the full post via Gawker.

In Webb’s latest Facebook status he gave thanks to God for allowing his mishap to cause his share to go viral:

I must have recited or heard that verse a million times in invocations in my youth, alone, in that Psalmist’s praise to make a joyful noise unto the Lord. But, until, today, I never really knew the power of what that meant. Today’s notorious post reached almost 200,000 people. The succeeding post reached a little more than a tenth of that, and all through the viral infection of social media and word of mouth. And, I certainly received my share of “interesting” comments, but no more out of the ordinary than what I have received since beginning this quest. But, the truly amazing thing about today was that “I saw also the Lord, high and lifted up,” and I was very much moved by the love and support of those who expressed their encouragement and support, even some in the national and local press.