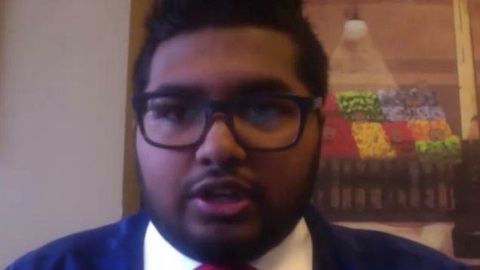 Mohammed Islam, wunderkind of worldwide finance, is no more.

Just a day after announcing he had made a $72 million fortune trading in oil and gold futures on the stock market, the seventeen-year-old New York City kingpin saw it all come crashing down.

Of course, it was easy for his empire to collapse, considering the kid made the whole thing up.

Here’s what happened. Islam is a senior at Stuyvesant High in Manhattan–which, as luck would have it, is actually located near Wall Street. He started the school’s Investment Club, which meets twice weekly, and simulates stock market trades to prep students for the real thing.

Islam, along with some friends, got access to New York Magazine via a friend’s father, who works there. To the father, he began to spin a tale of incredible luck and preternatural success. Islam claimed to have made $72,000,000 US dollars trading oil and gold futures during his school lunch breaks, along with some tidying up after school.

He said he made enough to buy a BMW and rent a multimillion-dollar apartment–and that, though he’d been offered a $12,000-per-month job on Wall Street itself, he had turned it down in order to concentrate on building his own empire.

Over the past two days, Islam’s story swept across the internet like a fire made of money. Everybody wanted a piece of it. It was like the first forty minutes of Goodfellas, only with fewer murders. (One hopes.)

CNBC came calling, and asked for an interview. Islam and his closest high school associates agreed to be interviewed on air. Shortly before the interview, they clarified the original story, saying that the $72 million figure had been “misrepresented,” and that the actual figure was just a few million. Which is, like, still pretty good, you guys. That’s not bad. For a 17-year-old, that’s still CNBC-worthy.

But the pressure continued to build, and, instead of being crushed into a diamond, the close-knit group simply imploded.

They admitted that the whole thing was a hoax. The actual amount Islam has made on the stock market is closer to zero dollars. By which he means it is actually zero dollars. (It wasn’t immediately clear if Islam had made $72 million in fake investments with the Investment Club at school. But $72 million fake dollars is also not impressive. It is not CNBC-worthy.)

The poor kid’s alienated his immigrant parents, too: the Bengali couple is skeptical of the stock market, and “won’t talk to” their son, per the Guardian.

Islam has a Facebook fan page he started himself not long ago. So far, he hasn’t mentioned the fabrication. It’s possible that he’s reading another, lesser-known story about a savant and his financial empire. If you’ve got time this holiday season, we do thoroughly recommend it.

A miracle in three screencaps