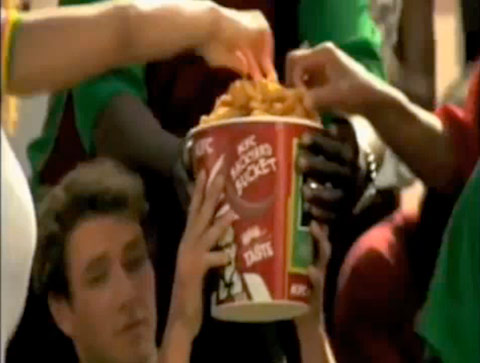 Kentucky Fried Chicken is in a bit of hot trans fat for an Australian KFC commercial featuring a white man in the midst of a crowd of spirited black people who asks the question, “Need a tip when you’re stuck in an awkward situation?” He then hands a bucket of fried chicken to the crowd and everybody is happy. He smiles at the camera and says, “Too easy.”

According to ninemsn.com KFC Australia issued a statement recognizing that the commercial had been “misinterpreted by a segment of people in the US.”

“It is a light-hearted reference to the West Indian cricket team,” the statement continues.

“The ad was reproduced online in the US without KFC’s permission, where we are told a culturally-based stereotype exists, leading to the incorrect assertion of racism.

“We unequivocally condemn discrimination of any type and have a proud history as one of the world’s leading employers for diversity.”

The ad does seem a bit insensitive, but I think the most remarkable thing about the scandal is the realization that they have Kentucky Fried Chicken in Australia! What is there slogan? “Great southern fried chicken from up north!” How does it compare to Victorian fried chicken? Do they have Vegemite chicken? So many questions!

PHOTO Little girl gives best “What Are You Thankful For?” answer ever