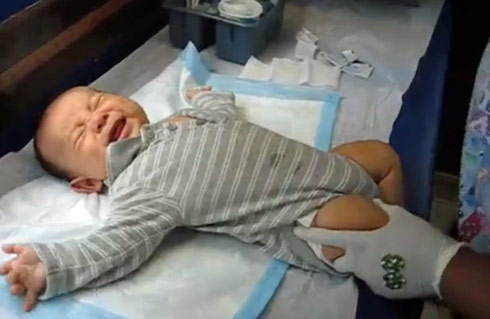 A new study released by the journal Pediatrics reports that increasing numbers of parents in Portland, Oregon are choosing alternative vaccination schedules for their children. The term for this practice is called “shot-limiting” and experts warn that it puts children and those around them at a greater risk for disease.

The study’s lead author Steve Robison added, “It’s easy for a baby on this alternative schedule to fall behind and not catch up. And we found that these children fell behind and stayed behind.”

Currently the CDC recommends more than two dozen shots from birth to 6 years of age to protect children against 14 different diseases. All of these shots means that sometimes your sweet little one can seem like a pin cushion during their scheduled appointments. As a parent, I can speak first hand to this experience.

Dr. Richard Besser with ABC was succinct in what he believes this practice of “shot-limiting” results in:

“A delay in vaccinating your children increases the amount of time they are susceptible to a number of diseases. This is a clear indication of where the anti-science movement is having an impact.”

When Besser references the anti-science movement in regards to vaccines see; Jenny McCarthy.

Some of the diseases that are vaccinated against are nearly non-existent so that creates a false sense of security among some. What parents need to realize is that the scarcity of these deadly diseases is due in large part to vaccinations. In May, the state of Washington declared an outbreak of whooping cough which followed the same in California in 2010. In California 9,000 people came down with the disease and 10 died as a result.

The topic of vaccinations is a controversial one for many but this isn’t so for the scientific community. Robison concluded, “There is a reason for the schedule: to get a number of these vaccinations in early when children are most vulnerable to these diseases.”