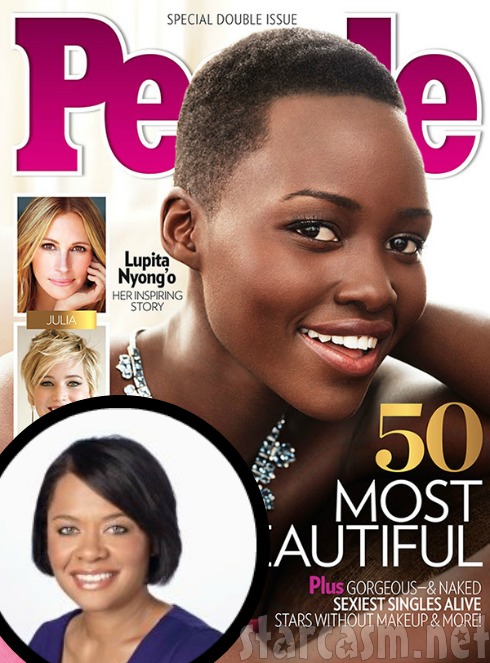 Tatsha Robertson (picture at top inset) became Senior Editor at People in January 2010 after leaving her role as Deputy Editor at Essence Magazine. According to The New York Daily News, which obtained a copy of Tatsha’s lawsuit, she wasn’t warmly welcomed by Executive Editor Betsy Gleick.

“You need to talk like everyone else here. You’re not at Essence anymore,” Betsy was quoted as saying in the lawsuit.

Tatsha said she also felt discriminated against by being left out of important meetings and by being repeatedly shot-down with her stories about black people. In one specific case, Tatsha said she suggested an article about a murdered African-American model, but Betsy said the magazine wasn’t interested because the slain woman looked like a “slut.”

In the cases a black person was profiled, Tatsha said Betsy approached the articles differently.

“[When People] put Trayvon Martin on its cover, Ms. Gleick was completely obsessed with attempting to unearth any potential negative fact about him before doing so,” the lawsuit claims. “Ms. Gleick repeatedly questioned whether he was a ‘good kid,’ yet never made efforts to vet white victims of crime.”

The lawsuit notes only 14 of 265 covers since 2010 have been focused on black individuals and that People only employs five black people.

Although Betsy left her position as executive editor at People in June — shortly after Tatsha was laid off — the lawsuit requests unspecified damages from her, People and its parent company, Time Inc. People did not respond to NY Daily News‘ request for comment.

PHOTOS The baddest pickup truck ever is… a Volvo?