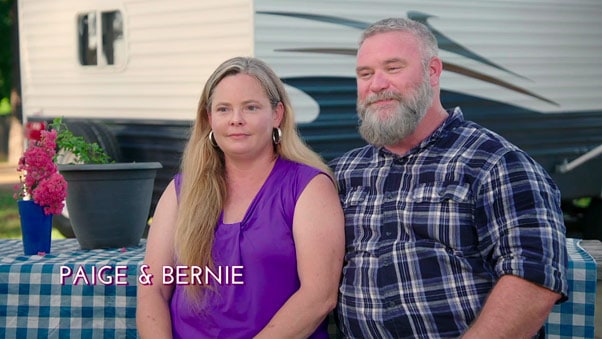 We shared the tragic news yesterday that Seeking Sister Wife star Bernie McGee passed away over the weekend. His wife Paige McGee revealed on Facebook that she was told Bernie suffered a “heat stroke/heart attack” while riding his bicycle, and EMTs on the scene were unable to save him.

Paige’s estranged brother Patrick Marble posted about Bernie’s passing as well, and his comments infuriated Paige. She returned to Facebook to lash out at Patrick, stating that it was his accusations of stalking (which led to Bernie and Paige being arrested earlier this year) that have caused Bernie the most stress over the past few months.

Paige started her post by clarifying that she still does not talk to Patrick, and anything that he is posting online about Bernie’s death is secondhand information. “Let me be very clear,” Paige begins. “Patrick Marble does not know a damn thing about my husband or him passing. All he knows is what he is reading on FB. I have not spoken to him for any reason and he damn well better not come to my house!”

The post then shifts to Paige pointing a finger at Patrick for being the cause of Bernie’s death, citing an upcoming court appearance on Wednesday stemming from the stalking charge specifically:

He did this! Patrick’s constant lies and attacks against us caused this! Patrick and my mother having us arrested for not doing a damn thing wrong did this! We were financially put out for having to hire lawyers, investigators, and missing work for this bullsh*t.

Patrick Marble has admitted numerous times he would not stop until we were fired from the show. Well, that never happened so he continued his bullying and harassment. Bernie has been under so much stress and the stress of going to court this coming Wednesday with fear of 1 year in jail wore on Bernie.

Bernie was so upset the day we were arrested because our sons had to watch us being taken away. Every night since then, Bernie has said over and over, the look on Johnny’s face. He just couldn’t get over that.

Patrick Marble and I do not have a relationship. We never have.

Patrick Marble… YOU KILLED MY HUSBAND AND I HOPE YOU BURN IN HELL.. And you better stay the HELL away from me and my family!

Bernie’s Seeking Sister Wife co-stars have responded to his passing on social media, including the Snowden and Winder families — as well as Brandy, the sister wife that the McGees were seeking on Season 2:

Thoughts and prayers for the McGee family.

We are so saddened this evening to hear of the passing of Bernie McGee. We hope and pray that Paige and his family will be comforted in this time of sorrow. This life is fleeting. May we all live in our truth every day and strive to live as openly and with as much caring as Bernie did.

bernie allen mcgee – our fellow cast member on seeking sister wife, passed away a few hours ago. . i’m glad i was able to meet such a gentle soul! . may your wife and young sons find peace and may you rest in power my friend. ?????? . #dimitrisnowden #lifeistooshort #liveoutloud #lovenow

Our thoughts are with the McGee family, including their children.

What happened to the Alldredges’ marriage to Donna? Why aren’t they on SEEKING SISTER WIFE anymore?