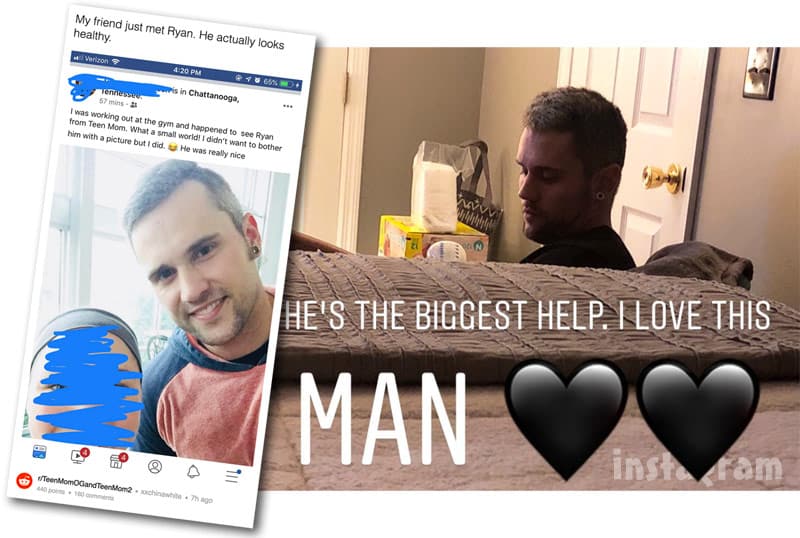 Teen Mom OG dad Ryan Edwards left a rehab facility in Alabama late last month after completing a 90-day stint to deal with his addiction issues. The 30-year-old reality star has yet to make a return to social media, but a couple photos he recently took with fans have been posted online — and he looks great!

Check out this photo of Ryan and a fan at a local gym posted on Facebook and then on reddit:

Here’s another recent photo of Ryan taken at a Chattanooga area Hardee’s:

Ryan from Teen Mom came into Hardee's today so of course we had to take pictures!! Oh and he got one of my Famous biscuits I made!!!!!!!!!

In addition to the fan photos, Ryan’s wife Mackenzie Edwards also posted a photo of Ryan post-rehab on her Instagram story. The picture, seen at the top of this post, was part of a Q&A session that Mackenzie had with her followers in which she answered numerous questions about Ryan, Teen Mom OG, and their newborn soon Jagger. (I assume that is Ryan feeding Jagger with a bottle in the photo.) Here are some excerpts:

QUESTION: How do you deal with all the hate you get? How do you just overlook it all?

MACKENZIE: I don’t give a rip what some keyboard warrior thinks. They don’t wipe my ass or pay my bills. I know me and my family knows me.

QUESTION: How’s life now that Ryan’s home with the kids and new baby?

MACKENZIE: He’s the biggest help. I love this man ❤️❤️

MACKENZIE: Way more like Bentley than Hudson. Hudson had dark skin and dark hair. Jagger is the opposite.

QUESTION: Will you and Ryan be at the reunion for Teen Mom OG?

MACKENZIE: Had to go. Didn’t film. 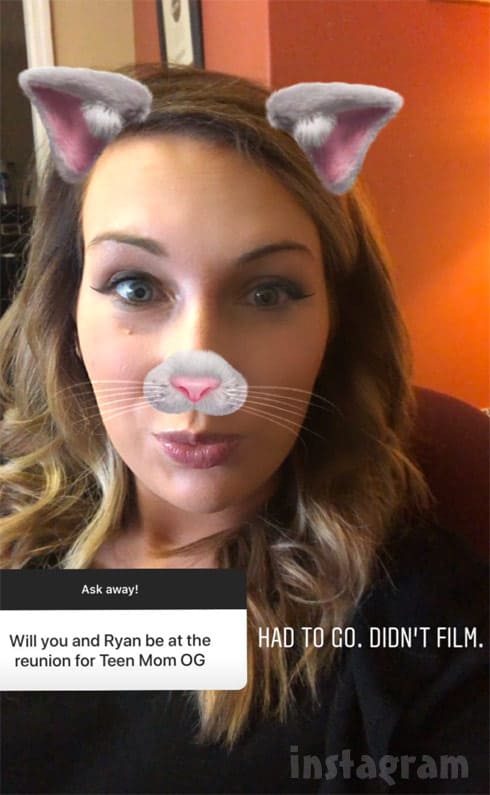 QUESTION: Are you choosing not to show your little man off, or is it something to do with MTV being first?

MACKENZIE: LOL I told MTV to p!ss off when they tried to film him. And they still tried their hardest. So now you guys get to hear commentaries about him which is super frustrating.

QUESTION: Did you know who Ryan was when you met him? Or did you have no clue about the show?

MACKENZIE: Who would think that a 30-year-old man would be on a show called Teen Mom? I had no clue. Soon it’ll probably be Teen Grandma.

QUESTION: Do you and Ryan have any cute nicknames for each other? ❤️

QUESTION: How was the labor/birth???

QUESTION: Did you get the epidural?

QUESTION: Do you think you guys will ever show more of your life again on MTV or too burned?

MACKENZIE: Maybe if it’s what we want to film about and not freaking looking back 24/7. You simply cannot move forward constantly looking in the rear view.

QUESTION: Why did you stay with Ryan even though he had a drug issue?

MACKENZIE: Do you burn your house down when it’s dirty? No. Do you set your car on fire when it needs a new part? No. Just because someone has a problem doesn’t give you an excuse to give up.

QUESTION: What advice would you give to someone trying to help an addict?

MACKENZIE: You will never be able to save them. you can be their support though.

QUESTION: Do you plan on writing a book or starting a YouTube channel to show the true side of your life?

MACKENZIE: If I wrote a book about my life experiences from 18 to now, it would have to come with a free coupon for anxiety medication.

QUESTION: How did Ryan react when he met Jagger?

QUESTION: What will Ryan do for work if he will not be on Teen Mom?

MACKENZIE: Ryan is a certified diesel mechanic and did a lineman apprenticeship.

QUESTION: Might be dumb, but how do you pronounce Jagger? The way it looks or “yay-ger”?

QUESTION: What is Jagger’s middle name?

QUESTION: Who did you have in the delivery room with you?

MACKENZIE: My mom, Jen, nana and my sweet girl Micah. I told everyone else to get out. Haha!

I should mention that there was another photo of Ryan that surfaced online recently. The picture was reportedly taken at Edley’s Barbecue in Chattanooga on December 6, and the person who took it claims that Ryan was there with Mackenzie and Jagger, and he had at least one beer.

Should Ryan be drinking? #TeenMom

Mackenzie has yet to respond to the claim that Ryan was drinking, but she did respond to the photo on Instagram. After a commenter wrote: “I want someone to see the baby and expose his face lol,” Mackenzie replied by writing: “Y’all are freaking nuts.” She added in another comment: “People like your psycho ass are the reason I don’t want him out in public.”

We continue to wish the best for Ryan, Mackenzie and the rest of their family. What I think doesn’t really affect anything, but I remain cautiously optimistic that Ryan has finally committed himself to getting better and is on his way to a happier, healthier life. I hope we see more photos like the ones at the top of this post soon!

Farrah Abraham on ‘poor choices’ by other Teen Moms, having more kids