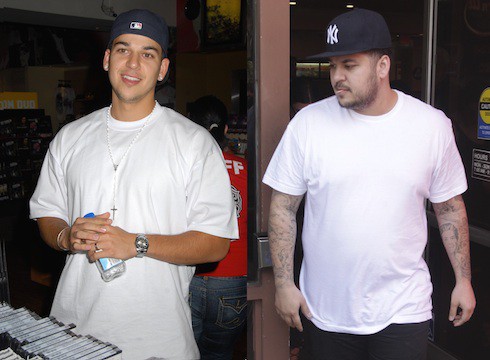 Contradictory Rob Kardashian weight loss rumors have been flying for weeks, ever since the 29-year-old announced he and his fiancée Blac Chyna are expecting at least one child this fall. Rob had been in a period of extended depression (and attendant weight loss) until his relationship with Blac appeared to bring him back around. Now, it looks like it might be possible that Rob is supposedly giving serious consideration to a $50,000 weight loss procedure, in advance of Blac’s delivery.

It was only a few days ago that the first of the Rob Kardashian weight loss rumors began to spread. Those rumors came in conjunction with fan outrage toward what many called Blac Chyna’s callous indifference to her health during pregnancy: she shared a baby bump photo on Instagram and captioned it “Why should I watch my weight when I’m pregnant?” Blac had previously shared her intention to gain 100 pounds during the pregnancy. At the same time, Rob, who gained an undisclosed but noticeable amount of weight over the past few years, credited Blac with helping him get back in shape, though recent photographs and rumors appeared to suggest that Rob had been taking his own health less seriously.

Now, a new report from Inquisitr suggests that Rob has decided to undergo a series of plastic surgeries, in order to shed weight and be healthier before his child is born. His late-summer wedding to Blac Chyna is also a factor in Rob’s decision, according to the piece, which claims that Rob “has been so down” about his weight gain that he’s consulted with at least one of Blac Chyna’s trusted doctors.

Rob “is keen to live a much healthier lifestyle,” the article stresses, but he also reportedly “needs that extra push to lose the excess fat he’s gained.” To that end, Rob is said to be weighing the possibility of “liposuction to his belly, chest, neck, arms, back[,] and buttocks”–to the tune of $50,000. However, it’s not about the money; Rob apparently “just wants to get to a place where he’s finally comfortable in his own body and doesn’t have to hide from his own family members out of embarrassment.”

Blac Chyna’s official due date has yet to be revealed, and, though she and Rob have said they intend to be married before the baby is born, the couple has not confirmed a date for their nuptuals.