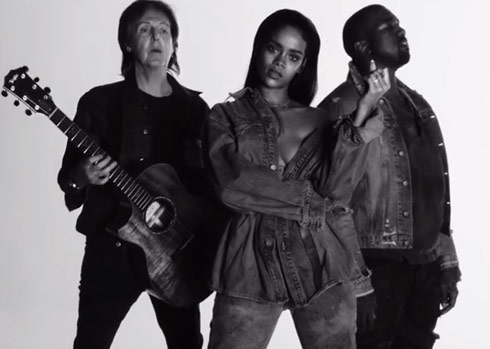 The visually straight-forward black and white clip directed by the fashion photography team of Inez van Lamsweerde and Vinoodh Matadin features all 3 superstars in denim – a fashion choice made by West.

In a preview Rihanna said, “Kanye came up with the idea of just doing some real street, denim, all-American-type look. Denim never goes out of style. It’s classic, it’s iconic, just like the f***ing Beatles.”

Rihanna revealed via Facebook that all 3 will be performing the song live together during the Grammys Sunday night on CBS.

Definitely loving the clip and the song – how about you?