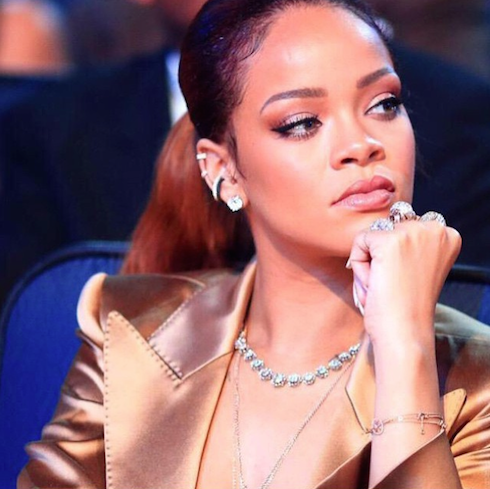 Rihanna has been teasing her “B*tch Better Have My Money” video all week–she’s peppered her Instagram account with stills from the footage, and debuted a preview of the video at the BET Awards over the weekend.

Then, last night, Rihanna dropped the bomb: The full video is now available for streaming through VEVO. (The tweet announcing the video alone has 12,000 re-tweets in just a few hours.) So we can all see for ourselves how bonkers the finished product really is. We were promised nudity, and we got it: not Rihanna nude, but in the form of a naked, bound, and terrified kidnap victim: the “b*tch” of the title.

The song clocks in at 3:39, but the high-concept video is a touch over seven minutes long. Get yourself a beverage and get settled in. (And be warned: this video is rather NSFW.)

And it was indeed Rihanna who wanted to get there: the concept for the video was hers; she’s been working on it all year. Here’s one of Rihanna’s jubilant Instagram posts from last night, leading up to the big reveal:

#BBHMMvideo Ya girl got director skillz!!! The concept for this piece came to me 8 months ago!!! So you can imagine how anxious I am right now!!! ??? #MIDNIGHT on #VEVO

Not everyone is taken with the clip. The Independent warns that it’s “clearly designed to shock,” while Gigwise warns that it’s “potentially triggering.”  And Consequence of Sound calls the video’s climax “particularly disturbing.”

What do you, the viewers at home, think? Is the video for the feel good hit of the summer that Rihanna expects it to be?