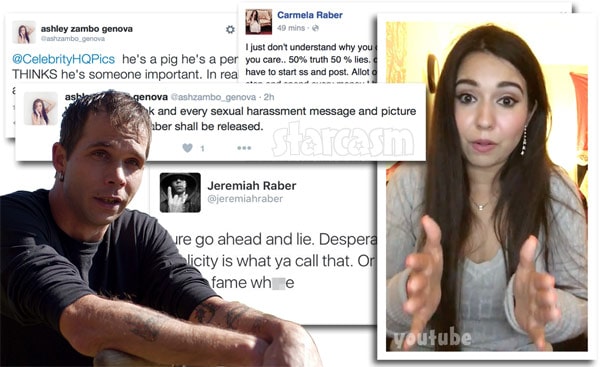 Return To Amish bad boy Jeremiah Raber and wife Carmela got married back in April, but the life of a reality star bride is not proving to be all sunshine and lollipops for this mother of four from Vancouver, Washington.

Carmela found herself at the center of a controversy after production on a film set to star Jeremiah was shut down late last month due to “discrepancies with certain individuals involved with the film,” according to a statement issued by the production company. The statement went on to specify that “the decision was made to release an actor from the production for his actions that we do not approve.” Those actions allegedly included “lying about conversations that never happened, sexual advancements made to one of the actresses and the repeated statements made by this actor of how he wasn’t sure of his participation with the film.”

Jeremiah and Carmela later released their own statements about what happened. “People make mistakes and I’m one of them,” Jeremiah said. “In no way am I saying what I did was right but I can promise that it wasn’t what others made it out to be. Me and Carmella have worked through it and will stand strong til the end.”

“Just wanted to say I’m fully aware of what happened,” Carmela added. “We are trying to get through this tough time…We’ve all made mistakes in life, Jeremiah and I had a rocky start and this would be one of our worst and in order to get to the better we have to overcome this situation.” She continued to say that she doesn’t want sympathy and that she and Jeremiah “will get through this” with God’s help.

But that wasn’t the end of things as Jeremiah, Carmela, and the lead actress in the film, Ashley Zambo Geneva, continued to speak out publicly about it on social media. “He’s a pig he’s a pervert. He THINKS he’s someone important. In reality, he’s a disgusting manipulative and ew,” Ashley tweeted in response to a comment about Jeremiah. “100% bragged about cheating on his wife,” she added. “I’d let it go but since his fans and friends are so obsessed…”

Here is a promotional photo for the movie, titled The Plain People, featuring Ashley and Jeremiah in character:

More time didn’t calm Ashley down at all. “After reading/hearing things,” she tweeted, “maybe I should give a statement… ?” When asked what it was that was upsetting her, Ashley replied: “he’s running his mouth and no apology. He might need reminded he also gifted other pics besides the shower one w the movie offer..” Ashley is referencing a photo that has made the rounds on Twitter in which Jeremiah is in the shower.

At this point, Jeremiah Raber’s ex-wife (and mother of his three children) Naomi Stutzman responded to Ashley’s tweet about potentially issuing a statement and details about what happened. “same doo-doo different yr!” Naomi wrote. “Speak the truth gurl! #awareness #preventmoreheartache” She later tweeted more encouragement: “Just shut them all up gurl and release the D already! It’s no big deal! Trust! ?@jeremiahwasabullfrog”

In a tweet that didn’t mention Ashley specifically, Jeremiah wrote: “Sure go ahead and lie. Desperate for publicity is what ya call that. Or to be blunt….fame wh0re.”

“Fame wh0re?” Ashley responded. “Was gonna drop it you pathetic sh!t till your stinky ass mouth didn’t shut up.” 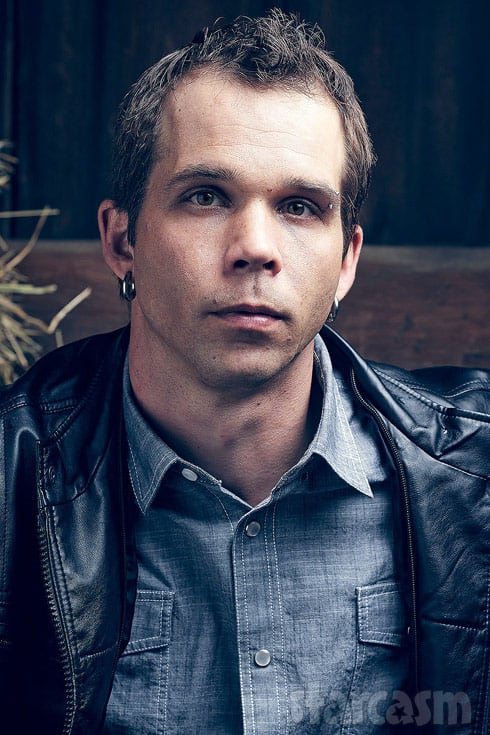 Ashley then unleashed a series of since-deleted tweets directed at Jeremiah in which she said she planned to release “every sexual harassment message and picture from Jeremiah Raber.” She shared some details of a couple of alleged incidents that happened before ending her tirade by calling Jeremiah a “pathetic sexual harassing asshat.”

More than a week passed and someone asked Ashley about what happened. “He pulled shady sh!t, sent shady sent. Gave proof..then was threatened w suit … Could counter but would involve good ppl,” Ashley tweeted. Since then she has been silent about Jeremiah on social media.

Meanwhile, Jeremiah’s wife Carmela Raber has been anything but silent! She has made numerous posts on Facebook about the fallout. Here is what she posted on the same day as Ashley’s tirade:

Ashley I wonder if your husband knows you’re letting men know that you’re down for whatever. Why didn’t I get that screen shot.

Sorry but it didn’t mean hiking, dancing.. It meant drugs, drinking… Correct me if I’m wrong please. Don’t start something you can’t finish.

I just don’t understand why you come to me with a half ass story acting like you care.. 50% truth 50 % lies. come up with what you said you have or I’ll just have to start ss and post. Allot of what you said is pretty illegal and I will not stop and spend every money I have until something is done to stop my name,jeremiahs name,our kids,loved ones from coming out your and you’re posse mouths, stalking,cyber stalking,slandering. If you need to contact my attorney his name is John vomacka. Just google his number.

As far as I know hacking is illegal, watching us at our business is considered stalking. by saying untruthful things and having nothing to back it up is slandering If you want to say he was pursuing you making you uncomfortable then why the fuck would u drive to go to him in the night being a married woman To take him to McDonald’s. Makes no sense I’m giving you a chance to clarify for me but all you’re doing is digging yourself in a hole.

And more from Carmela in the comments section:

I just wish they would mature up and not play games and be straight up…they talk to much crap with nothing to back up everything 100%..like I said I wont quit legally through court until they shut up about us and stop harassing and stalking us…from her mouth or messages i should say she was watching us while we work, said out of her mouth shes going to confront me, then saying she has certain things but cant produce it.. that’s not even half of what shes said.. I could go on but Ill not go there. someones about to be “gifted” with jail time if they don’t be careful. May advice is to let it go and just move on.

Butta face.. Aka attention wh*** leave me the f**k alone.. Quit messaging your fears.. How the hell you find that much time to make new profiles.. Obviously don’t have much time with the hubby.. Move on bit**. No one wants you around and your damn tribe of haters you just gathered.

Then, on July 15, Carmela posted a video on YouTube that she addressed to the “Haterz bullies and all the above:”

Here’s Carmela’s message from the clip:

Hi, my name is Carmela and I am making this video to tell people to leave us alone. People keep making fake profiles, messaging me, telling me that my husband is cheating on me. And, to be quite honest, I don’t care. So, for the one that says she has all these messages that she cannot produce, let it go. I don’t care. You’re not going to separate us. It’s not working.

So, for Bruce, that keeps non-stop harassing, making all these fake profiles, following us, knows where we live, knows everything — you’re about to see jail, OK? You’re about to go to prison. So, if you keep it up, that’s your future.

Our future? We’re going to live life and enjoy ourselves and be happy because from this day forward, we’re not going to give you any more satisfaction of responding to you guys. So, this is our last response. This is it. Let us live. let us be, and move on.

And the girl, the messages that you didn’t give to me, I have them. And I am so curious to know if you’re husband has seen them.

Well, this is the last, last time I’m going to say this: Leave us alone. Good-bye.

So far, it appears as though Carmela has kept her word as she has not mentioned it publicly since her video. The same goes for Jeremiah and Ashley, so perhaps we can finally close the chapter on The Plain People fallout drama.

Return To Amish returns in November with new cast additions