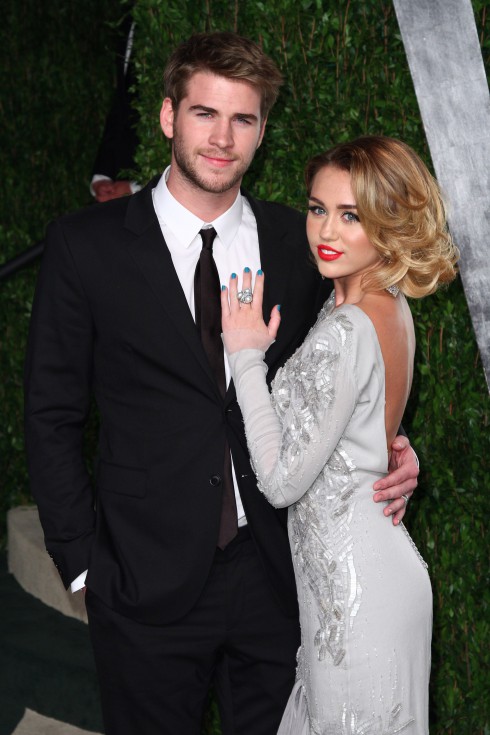 Just a couple months ago, Miley Cyrus and her fiance Liam Hemsworth were rumored to be secretly married. Now, they reportedly split. It all started when Liam was rumored to have hooked up with actress January Jones. The two were spotted at a pre-Oscar event and even left the event together. After it happened, Miley denied that she called off their upcoming wedding. But after being spotted out sans wedding ring on a couple of occasions, it appears they are no more.

“Miley and Liam are done; it’s over. She likes to party really hard and can be pretty wild. It became a problem for him,” a source tells Page Six.

“They have broken up before, and are broken up again now. There was drama because she suspected he had a wandering eye. And she recently tweeted a denial that he cheated,” another source adds. “While Miley has insisted they are still together, right now they are very, very much apart.”

Meanwhile, Liam has been in Australia for weeks. As an insider explains, “He needed to get away from Los Angeles and spend some time with his brother and friends.”

Miley and Liam had first began dating in 2009 after meeting on the set of The Last Song. Then, in May of 2012, Liam proposed. Since then, things have seemed positive. Miley was even reportedly planning three weddings according to her dad Billy Ray. We’re guessing one in Los Angeles where they live, one in Australia (Liam’s hometown), and one in Nashville (Miley’s hometown).

After the first round of break-up rumors hit the web, Miley had tweeted, “I am so sick of La. And sick of the lies that come with it. I didn’t call off my wedding. Taking a break from social media. #Draining.” That was before she was spotted out without her wedding ring.