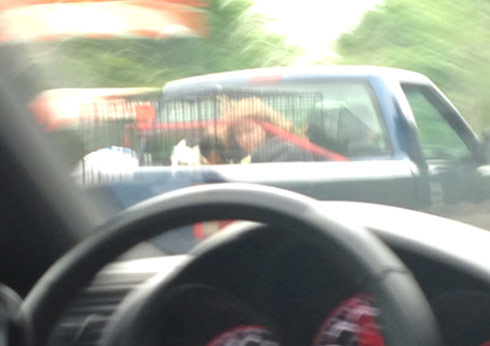 A Pennsylvania mother and her boyfriend are facing charges of child endangerment after they were spotted zooming down a turnpike with her 10-year-old daughter inside a dog cage along with the family pet in the bed of their truck.

Motorists who witnessed the unbelievable circumstance, one was even heady enough to take the above photo, dialed 911 to notify authorities. The response led to Abbey Carlson, the girl’s mother, and Thomas Fishinger, the woman’s boyfriend, being pulled over near their home.

KDKA out of Pittsburgh sent reporter Ross Guidotti out to the home of the family to get their side of the story and they defended their actions arguing that it was all just a big misunderstanding.

Carlson: “She (the daughter) wanted to be with her dog. She plays with him in here (the dog cage) all the time. They’re strapped in. I just didn’t think it would be an issue.”

Fishinger: “It (the dog) was back there (impersonates the howling cries of their dog) because we knew that it was three of us, so we couldn’t put the dog inside the cab.”

Fishinger acknowledged that the girl was riding in the cage as the truck was moving after they let the daughter ride inside the box because, as they explained it, the animal was upset. “I don’t want the dog to suffer. That’s like animal cruelty to me, you know, the dog crying like that,” Fishinger argued. Carlson added, “I just didn’t think it would be an issue.” 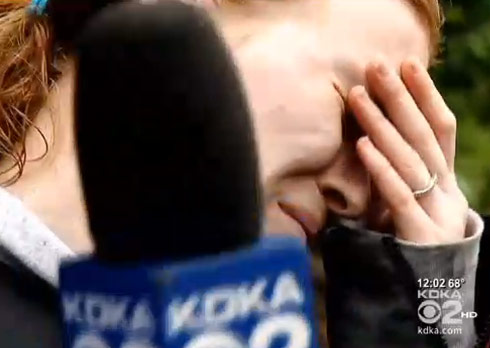 ^Abbey Carlson gets emotional while being interviewed.

The daughter is currently with her mom’s mother.

Carlson, 29, and Fishinger, 33, were arraigned yesterday morning on the felony charge and released on their own recognizance. They are scheduled for a June 6 preliminary hearing in District Court in Pittsburgh.

The Smoking Gun discovered that Fishinger was named last Thursday in a criminal complaint charging him with 18 counts of identity theft and access device fraud (15 of the counts are felonies). He was freed from custody Friday after posting $5000 bail.

Jared Fogle allegedly spent ‘at least’ $12,000 a year on prostitutes