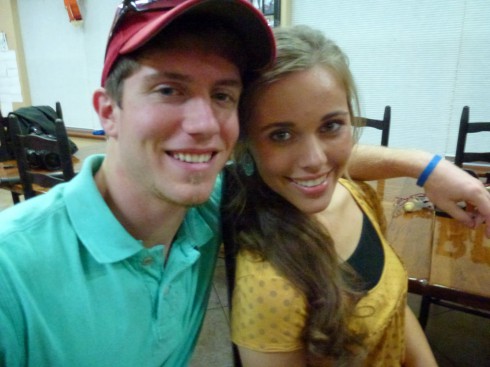 The Duggar family definitely live their lives a bit different than most. They not only believe that a family should have as many children as “God allows” them, but they have strict dating rules for their children prior to marriage. Their oldest son Josh has been married to wife Anna for a while, and before they got hitched they did an official Duggar-style courtship. Now his younger sisters are starting to look for mates, and they are adhering strictly to the family’s guidelines about dating, courtships, and engagements.

In fact, dating really isn’t allowed at all. A big difference in the way potential Duggar paramours interact with each other versus traditional dating, is that the love interests aren’t even allowed to talk much or get to know each other without permission from the father. This is kind of standard for many parents with younger teens, but this guideline is expected at any age.

Once Jim Bob, or the girl’s father approves of a young man’s interest in the girl, they are allowed to talk on the phone and Skype and start to get to know each other. As 20-year-old Jessa explains, “Sometimes it’s so easy to say like, “Oh, this guy is cute,” and then go with it instead of sitting back and saying, “Is this someone I really want as a future spouse, like someone who will make a good dad to my kids?”

If it looks like the couple is starting to get serious about getting married someday, they can enter an official courtship where they can spend time together with chaperones, (although according to this excerpt from their book, they may get some alone time.) “Courting is getting to know each other in a group setting, both families spending time together and the couple setting goals together to determine if they are meant to marry,” Jim Bob explained. “With dating, a couple will often pair off alone and that sometimes leads to a more physical relationship.” Side hugs are allowed during a courtship, but front hugs and hand-holding is not acceptable.

Kissing is not allowed in a courtship, or even after an engagement. The Duggar parents say that this decision is entirely up the children, and that all of their large family has so far decided to save their first kiss for their wedding day. Jim Bob and Michelle Duggar, however, did kiss before their wedding, something they say they now regret.

Jessa is currently in a courtship with 18-year-old Ben Seewald, who owns a windshield repair shop and has plans to be a minister. She defended her family’s position on sex and kissing to Cosmopolitan a few months ago, “We’ve set our guidelines really high, and people will not understand that. They’ll be like, “That’s weird. How are you going to show you really love the guy if you’re not having sex with him before marriage?” But that’s where we purpose in this stage of our relationship to focus on building strong communication because anyone can just go out and have sex,” Jessa explained. “[As] time goes on, maybe at engagement, we’ll talk about hand holding, but we want to save our first kiss for marriage, too.” Jessa also pointed out that saving yourself for marriage guarantees a 0% sexually transmitted disease rate.

22-year-old Jill Duggar got engaged to missionary Derick Dillard after a five-month courtship. Dad Jim Bob actually kind of set them up, and they were able to meet for the first time Nepal after doing some supervised Skyping while Derick was in Japan. He then ventured to India and Isreal before returning to the states to meet the whole Duggar family. It may seen extremely difficult to keep your hands off your fiance, but Jill says it’s all about not being around people who pressure you to lose self control. “Self-control comes from within and being willing to just say, “Hey, I’m not going there. I’m not going past this line. I’m not going to have sex” — you know, whatever your standards are,” she told Cosmopolitan. “At the same time you also have to do what the Bible says. If you have any problem with drinking, don’t go by the tavern. And if you have a problem with like, “[If] I’m around these certain people, then I’m going to be pressured into having sex,” then don’t be around them.”

After marriage though, all touching restrictions are off. Michelle Duggar has expressed adherence to some advice her friend Gala gave her. According to Michelle, Gala told her “You need to realize that you are the only one who can meet that need for your husband. Anybody can iron his shirts, anyone can fix him lunch or he can get lunch out if he can afford it. Anybody can do those other things for him, but only you can meet that intimate need he has in his life. It might not at that moment be a need for you, but it is for him. Don’t forget that.” She say’s she’s remembered that advice many times when she was so tired from the day’s work and taking care of all the children.

For more on the Duggars views on courtships an relationships, the four oldest Duggar daughters, Jana, Jinger, Jessa, and Jill co-authored a book about their life and their beliefs called Growing Up Duggar.

Axl Rose storms off stage at GN’R show in Dublin