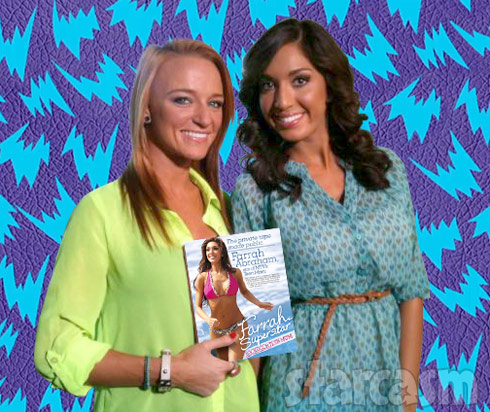 According to a new report, Maci Bookout is leaving Teen Mom OG after one season and refused to let MTV film Bentley about halfway through the season — both because the network brought Farrah Abraham back on the show!

The report comes from the Being Maci Facebook page. Here is the full post from moments ago:

Maci decided to not have her son Bentley filmed halfway through the upcoming season of MTV’s Teen Mom OG airing March 23rd, because Farrah Abrahams had been brought back on the show halfway through and she did not feel it appropriate to have her 6 year old son on the same show as her. She also decided this will probably be her last season of “Teen Mom” as well because of that reason, but said she has no hard feelings toward Farrah.

The Being Maci Facebook page was created in conjunction with MTV’s announcement of the Being Maci update special last year. It is not believed to be “official” in any way, but the page seems to always be accurate with its information that appears to come from access to Maci and her family’s personal social media accounts. We would assume that means that Maci or a family member recently posted this information, but we have yet to be able to confirm that.

(It should be noted that Bentley did participate in the “Getting To Know Maci” special, although it is unclear when that was filmed or if that would have even been an issue for Maci.)

The animosity between Maci and Farrah is well-documented, although Maci has almost always politely dodged the issue publicly. It has been reported that Maci was not alone in her disapproval of MTV allowing Farrah to be on the show, and I’m wondering whether or not all of this is Maci following through on some sort of ultimatum.

In a Blog Talk Radio interview with Malone’s Hype Line back in May of 2013, Maci voiced her opinion on Farrah’s infamous sex tape publicly for the first time, and although she did not disparage Farrah for making it and selling it, she did express frustration over Farrah allowing it to be titled Backdoor Teen Mom.

“One thing that I am upset about is that Teen Mom being in the title,” Maci said. “When Teen Mom is a part of that, it kind of falls on everyone else that was on Teen Mom.” Maci continues:

When people see that, and they see Backdoor Teen Mom, the title of it, and then maybe they thought about booking me for a speaking engagement, or maybe they thought about booking me for a talk show, but then they don’t want to anymore because people might think that everyone of Teen Mom as, like we all did a sex tape or we all did that, and that’s just not something that I would ever do, so that’s what irritates me is that I feel like even though I have nothing to do with it, I feel like I’m still kind of incorporated in that franchise, and that’s no longer a part of me. Teen Mom is over. I’ve moved on, and I’m doing my own thing now, but now I feel like that’s always going to be branded on me … I feel like 85 percent of the time, it’s going to be like, ‘Oh my God, that’s the girl that did that sex tape.’ Anything like that, I just, I don’t want to deal with the negative part of it.

If the report is true, it will be a HUGE bummer to not only miss out on half a season of Bentley, but also future seasons of Maci. I think the “Getting To Know” specials emphasized that, even more so than the original Teen Mom series, these young women lead COMPLETELY different lives that are not connected. If anything, I think having Farrah on Teen Mom OG will only further emphasize just how different her life is than the other moms on the show.

Of course, I suppose you could take the “glass half full” approach to the report and say that this move by Maci, combined with big ratings for Teen Mom OG, might result in four separate shows. Perhaps MTV could even revisit the Being Maci, Being Farrah, Being Amber and Being Catelynn titles! Perhaps they could air them in back-to-back half-hour blocks two nights a week or something like that? Or even stagger them throughout the year?

RT if you think @MTV needs to make #BeingMaci a series! @MaciBookoutMTV

Catelynn Lowell and Tyler Baltierra to be on Couples Therapy?