Luckily, Vivid was able to get it up (their web site) by tapping into additional servers. At this point, they are successfully handling the “immense load” of customers who want to see Farrah in her latest enterprise.

Farrah was quick to embrace her baller (ball her?) status by tweeting a photo of herself next to a stretch Rolls Royce limousine along with the words, “Well I can’t Drink & Drive so why #NOT Roll in this:) TheBiggestLimo.Com 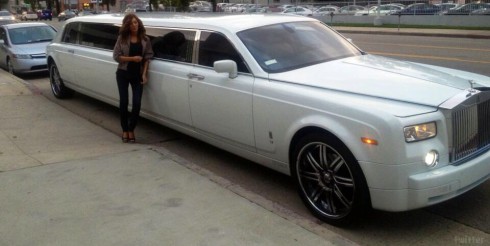 Meanwhile, Farrah still hasn’t seen the flick nor does she intend to.

“I’ve made my business deal and now they hold the rights and can edit and alter the movie in whatever way they wish,” she explains to Radar Online of why she’s not interested in seeing the final product. “That might make it more pornographic in order to suit their adult entertainment fans. Therefore, I’d rather stick to watching my version because that is what I had control over. I am happy with it as a keepsake.”