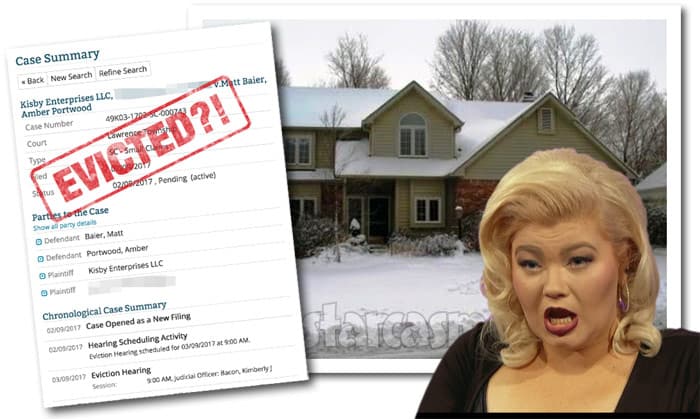 In a bit of confusing Teen Mom OG news, Amber Portwood and her fiance Matt Baier are scheduled for an eviction hearing next month for the house that they recently purchased, which was featured prominently on the show last season.

According to online court records, Amber and Matt are defendants in the small claims court where they live in Indiana, and they have an eviction hearing scheduled for March 9: 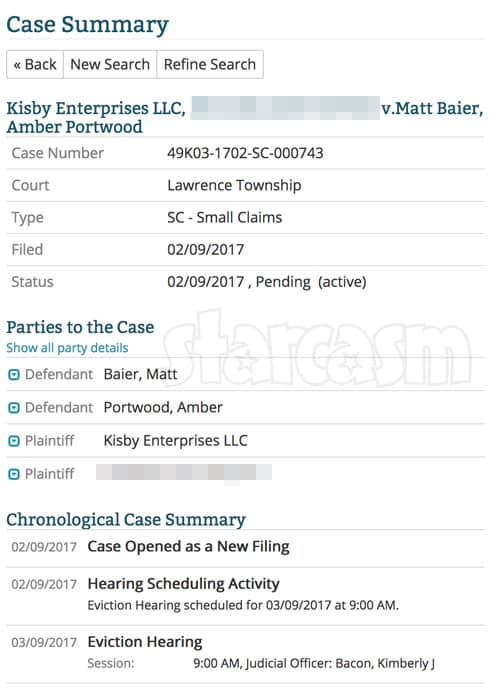 So how is it possible that Amber and Matt risk being evicted from a house that they supposedly bought? Amber attempted to answer that question late last year when it was discovered that the mortgage on the home was not in her or Matt’s name. Here’s a YouTube video about the property and the fact that it appears to be owned by someone else:

After the video was posted, Amber shared this message on Twitter:

Just watched a video about my house lol. We bought it from an investor and are flipping it as we’re living here. Which is why you will not find our names..we invest and flip then sell and make profit. It’s a private owner. People come on. Stop being obsessive? It’s weird..?

So the house we saw on the show was a flipper? From what we were shown, it didn’t appear that there was much potential for upgrades with a substantial profit margin. Of course, if they were renovating the interior, that might explain why we saw so much footage of Matt and Amber hanging out in lawn chairs in an empty garage.

The online court records do not indicate what the reason for the eviction hearing is — whether it is due to Amber and Matt’s lack of payment, or another lease violation. You may recall that the couple had troubles with their previous landlord, who has filed a lawsuit claiming they had to spend more than $7,000 to repair damages to that rental property — most of which due to Amber and Matt’s numerous pets.

I’m guessing that Amber will downplay this, but there has to be a pretty serious issue between them and the investor for them to start the eviction process!

UPDATE – Radar Online has obtained the actual “Notice Of Claim For Possession Of Real Estate And Removal Of Tenant’s Personal Property” filing and it reveals that the landlord is claiming “late/unpaid rent, alterations to property without owner’s approval, excessive damage to property.” The filing reveals that Amber and Matt were supposed to be paying $2,200 a month for rent, and the plaintiffs are asking for $2,640 in damages in addition to “court costs and other proper relief.” It is unclear just how much rent was unpaid, but it seems clear that Amber and Matt should have directed some of their autographed guitar funds towards rent instead!

I confess that the extent of my knowledge of house flipping comes from watching those shows on TV and recently buying my own home, so perhaps someone could explain to me how “buying” a nice looking house (in an established neighborhood) through a third party and then leasing that house and “flipping it as we’re living here” makes any sense? If Amber and Matt were doing upgrades on the home, and now they are potentially getting kicked out, does that mean they just wasted that money? This is so confusing!

The eviction hearing was first posted by the anti-Amber Twitter account using the spiteful @AmberLPorkwood handle. That account had further interactions with another Twitter account it claims is actually Amber, but there is no way to confirm that, so their conversations are not included here.