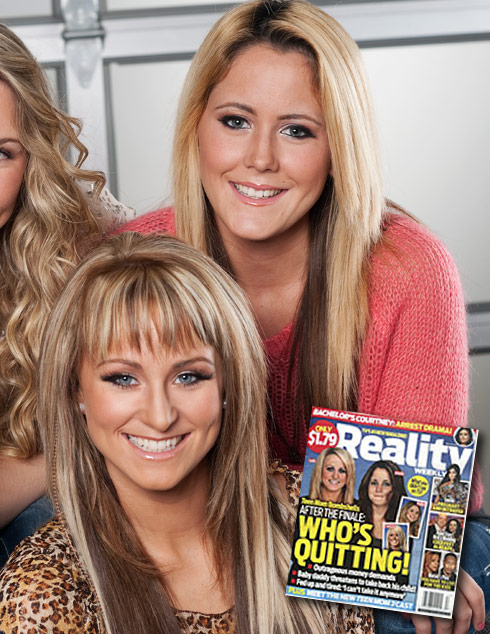 Reality Weekly sure loves them some Teen Mom stories! The publication has only been around a few months and it seems like every other issue has had Jenelle or Leah on the cover, including their premiere issue with the announcement that Leah was pregnant. This week the magazine features both Jenelle and Leah as the main cover story with the headline, “Teen Mom Bombshells – After the Finale: WHO’S QUITTING!”

According to the article, Jenelle and Leah are upset that their fame hasn’t seemed to translate into a proportionate amount of pay.

“Whenever the issue of spin-off shows for the cast of Teen Mom 2 comes up, Leah has been holding her hand out for more cash,” an insider tells them. “She really has gotten a big head because of all the attention. A lot of people in Elk View joke that she’s like the redneck Kim Kardashian.”

Leah is also worried about the toll being on the show has taken on her personal life, according to the source. “Leah says she’s fed up with the interference in her life, and she can’t take any more,” the insider reveals. ”It’s no wonder she’s cautious. She’s already been through more stress in a year then some people face in a lifetime.”

UPDATE – Leah’s mom has responded to the article on Twitter by writing:

“I can NOT speak for jenelle ! But as far as Leah’s part goes. BS! My gosh Jeremy makes more in a week than Leah makes in a month BS article on Leah’s part starcasm”

@TM2LeahFans – “I knew this wasnt true about Leah. I would love to know what ‘Source’ gave them that info!” 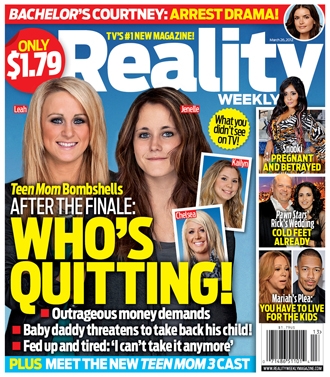 Jenelle Evans’ manager Leo Daniels also spoke with the tabloid, saying of his client, “She needs to renegotiate because she’s not getting anything near what the other girls are getting, and she’s the highest rated Teen Mom.”

“She feels certain that she deserves a raise, but there are plenty of other options out there,” a different insider adds. “She will quit the show if she doesn’t get that extra money.”

“I don’t think they should care about what anyone else has to say, but they should also make the right choices for themselves,” Farrah reveals. “If they’re going to be making publicly bad choices, I would completely understand if they didn’t want that to be publicized any further.”

“I want to become a role model for others,” she adds. “I don’t know where the other girls see themselves, but they definitely have to make their own choices for where they see themselves going in the future.”

I’m not sure about the Leah insider, but that is a direct quote from Jenelle’s manager, so I suppose there has to be some truth to this. If that’s the case, it should be an interesting game of contract chicken! But who knows, with Teen Mom 3 officially in the works maybe MTV would be willing to just walk away from Teen Mom 2 after Season 3.

My guess is that there will be some sort of compromise. Remember, the network was willing to negotiate with the Jersey Shore crew, and gave them a raise up to $100,000 an episode for Season 4, which equated to $1.3 million. And also remember, they filmed Season 5 in the same year so the cast’s annual salaries were actually $2.6 million at least.

I’m not saying the stars of Teen Mom should be making $100,000 an episode, but I don’t see why they shouldn’t be making as much as the Shore folks in proportion to the ratings. Let’s do the math shall we?

There are 8 cast members on Jersey Shore. For Teen Mom 2 there are only four, but let’s assume that the baby daddies and possibly a select few family members also get a little coin for their appearances and round that number up to 6.

Multiply that times 13 episodes (We’ll count the two-part reunion special as one episode as well as the two-hour episodes) and the result is right around $867,000 per season.

Something else to remember is that the Jersey Shore folks are able to make a lot of money with endorsements and appearances (The Situation was rumored to have made close to $5 million in 2011 for example).

I’m sure lots of people would complain that $867,000 a year is too much money to pay someone “just for getting pregnant at 16,” but this is a business and these girls are generating millions of dollars in revenue for MTV, so I think they deserve to earn as much as any other television star, actor, athlete, or musician generating similar amounts of money for their companies. If some teenager wrote an autobiography about being a teen mom and it got turned into a successful movie, I’m sure no one would be complaining that she was getting “paid for getting pregnant as a teenager.”

That’s my two cents. What do you think? (Either way, I sure would hate for Jenelle and Leah to quit Teen Mom 2!)