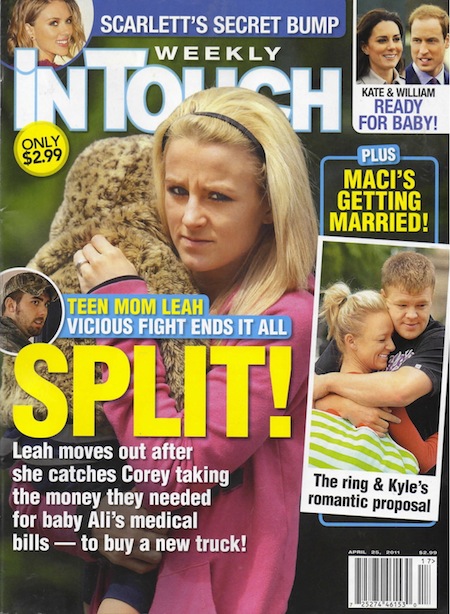 UPDATE: Unfortunately, divorce rumors have been confirmed by photos of Leah Simms filming for MTV, crying over divorce papers. CLICK HERE for more.

Tabloids are never big fans of happily endings and the emotional wedding of Leah Messer and Corey Simms in the season finale of Teen Mom 2 is apparently no exception. Just a couple weeks after the parents of twins Aleeah and Aliannah pulled America’s heartstrings both In Touch and OK! are reporting they are separated and headed for divorce!

Though the magazines agree that Corey and Leah are splitting up, their stories – and who to blame – differs. In Touch is claiming Leah was the one who finally called it quits after Corey reportedly took out a large sum of money from their joint account and bought a pick-up truck! From In Touch:

The final straw came recently, when he transferred $19,000 out of their joint bank account to buy himself a new truck — depriving Leah of money she needs to make ends meet. “He did it without telling Leah, even though the money is mostly her earnings from MTV,” a friend shares exclusively to In Touch. “When she found out, they had a vicious fight and she left him.”

The “insider” for In Touch also claims Leah has already begun the process of getting full custody of Aliannah and Aleeah. (I assume Corey will get custody of his frayed camo West Virginia hat.) 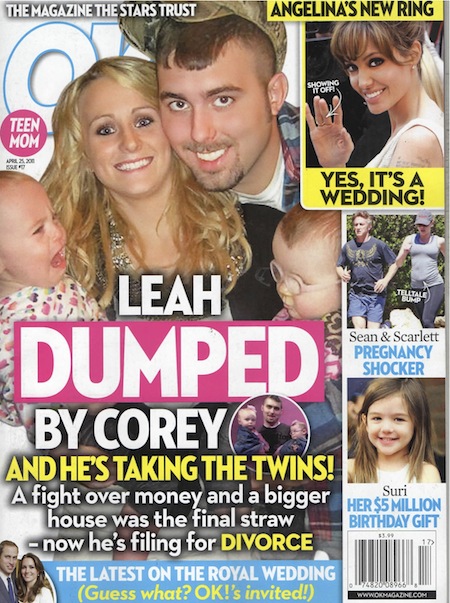 Meanwhile, a “close friend of the couple” tells OK! that it was Corey who ended things:

“Corey is going to file for divorce,” a close friend of the couple tells OK!.

Fed up with Leah’s obsession with buying a better house, Corey left her. Meanwhile, Corey is bunking with his own mother, rent-free.

“He and Leah have been living apart for two weeks now, and he has been very happy,” the pal adds.

Usually I take these tabloid stories with grain of salt, but the fact that two of them are reporting that Leah and Corey are splitting up has me a bit worried. Plus, OK! had previously confirmed that Leah and Corey had been by the Clay County Circuit Court to pick up either divorce or custody papers.

So far all is quiet from Leah on Twitter and Facebook – I will update as soon as there is any kind of reaction to the stories from Leah or Corey.

UPDATE – This isn’t looking good. Leah is usually quick to dispel these sorts of rumors, as she did back in March when she responded to a similar story by tweeting: “Just for the record, Corey and I are NOT divorcing!(:” Not only has Leah not responded to the stories in OK! and In Touch but there has been a good deal of suspicious activity on her official Facebook page that seem like defensive maneuvering.

For instance, for a brief period of time the page removed the profile photo of Leah and Corey from their wedding and replaced it with a picture of just Leah, which was later switched back. Here’s a screen capture of the page with the photo changed: 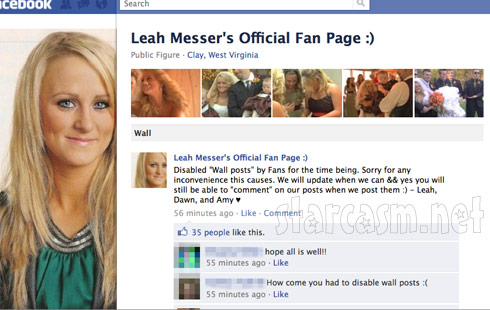 The page also posted this message to fans today, before it was deleted a short time later:

Disabled “Wall posts” by Fans for the time being. Sorry for any inconvenience this causes. We will update when we can && yes you will still be able to “comment” on our posts when we post them 🙂 – Leah, Dawn, and Amy ♥

And Leah’s close friend Amy LaDawn posted this next message on her Teen Mom fan page:

Just want to let you all know that yes I have seen your questions regarding the Magazine articles & Im not ignoring you all at all. However I can not comment on the matter at this time. Im sorry for any inconvenience this causes. — Amy LaDawn (Leah’s close friend)

In my experience (and I’m sad to say that I’ve had quite a bit of it covering just this sort of thing) it sounds as though Leah is preparing some sort of official statement and the news is not going to be good. Stay tuned.

I think the only way to look at this with a positive outlook is to speculate Leah and Corey are just having the usual relationship problems and aren’t split up but due to contractual obligations with MTV they can’t address the rumors directly. That sure seems like a stretch at this point, though. Ugh

UPDATE – Another bad sign. Leah was photographed taking Aliannah and Aleeah to dinner Friday night and Corey was nowhere in the pictures. If you remember from the Teen Mom 2 Finale Special with Dr. Drew, Corey and Leah said the grandparents usually watched the girls on Friday night so Leah and Corey could spend time alone together.

Judge rules against Jenelle and David Eason in custody case