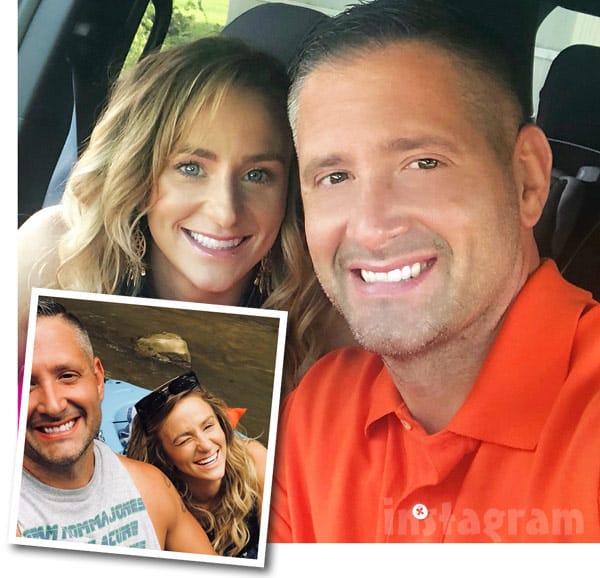 It’s been one month since Teen Mom 2 star Leah Messer officially revealed that she is dating 39-year-old Jason Jordan, a fellow divorcee and father of a two-year-old boy. Since that time, she hasn’t really posted too much about him on social media. That changed earlier today as Leah shared a video and several photos enjoying some good ol’ country fun with her man — and I don’t think she’s ever looked happier.

“Seriously one of the best weekends I’ve had!” Leah captioned the gallery, which included a video clip of herself on a rope swing being pushed by Jason. “I don’t think we stopped laughing!” Leah added as well as a heart emoji and a string of hash tags that included #greattime, #sohappy, #greatpeople, and #liveyourstandard.

Here is the full gallery:

Seriously one of the best weekends I’ve had! I don’t think we stopped laughing! ♥️ #greattime #sohappy #greatpeople #liveyourstandard

It was previously reported that Jason would not be featured on the upcoming season of Teen Mom 2, but it’s unclear if that is still the case. They’ve been officially and publicly dating for a month now, and it’s really hard to imagine producers having to skirt around such an obviously HUGE impact on Leah’s life. Perhaps this gallery is an indication that Leah is a little more willing to subject Jason to the Teen Momiverse?

Speaking of being subjected to the Teen Momiverse, Jason has already felt the impact after the dating announcement. In addition making his formerly public Instagram profile private, he has also deleted his series of “West Virginia Meth Man” YouTube parody videos that we were the first to uncover. Rest in peace West Virginia Meth Man! Perhaps it is for the best.

I said it before and I will say it again: I’m so thrilled that Leah appears to be moving on and testing out the dating pool again! It really seems like she took a lot of time to focus on herself, and hopefully she’ll finally find that happily ever after so that Teen Mom 2 fans can start griping about how boring both her and Chelsea’s segments are. 😉

As Fixer Upper’s fourth season comes to a close, Chip and Joanna Gaines look to the future of their Texan empire