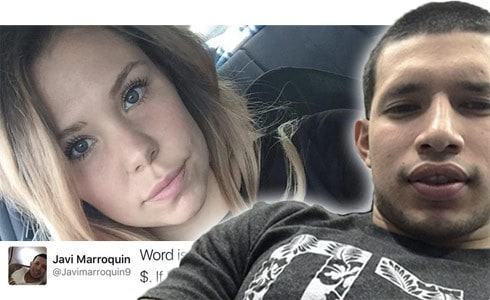 Kailyn Lowry and Javi Marroquin are at it again!

The war of words between the Teen Mom 2 stars reignited after it was revealed that Lowry was granted a Protection From Abuse order against Marroquin during a tense family court hearing yesterday.

The Ashley reports that cameras were in tow as the parents to son Lincoln hashed out the details of the order. Kail, who is expecting her 3rd baby with an as-yet-unnamed father, did not file an emergency order, indicating that she did not feel that she was in any immediate danger. Javi chose to consent to the order which means the court will not investigate any abuse claims.

It’s also important to highlight that Javi’s signature does not equate to an admittal of abuse.

Radar reached out to both parties and here’s what they had to say:

Javi: She said it’s because I harassed her via text about all this divorce and guy stuff. I signed a consent PFA, which means there’s no evidence of abuse. I just can’t contact her unless it’s in regards to Lincoln for a year. Her and the world know I would never threaten or put my hands on her. As a man, I have my proof and will get out of it.

Rep for Kail: Kail filed a PFA against Javi for harassment and showing up at her home aggressively. She doesn’t want that around the boys. They didn’t look for abuse and it wasn’t even a question since Javi signed the consent. Kail’s first priority is and always will be her children. We ask all to please respect Kail’s privacy during this difficult time.

In spite of her request for privacy, both Kail and Javi took to social media to vent:

don't worry you will. I guess people are desperate when they have no ammo they'll make up lies to try and take me down.

never once put my hands on any female. I guess texting someone the truth falls under that now.

I was divorced last year, I moved on. Stop tweeting me about it. He clearly hasn't gotten over it so tweet him about it!

Guess I should start writing my tell all too ?

I guess I would be hurt too if I believed every single thing I heard.

What's that saying? You always see someone's true colors by the way they treat you when you're on bad terms ?

Write the tell all…I have nothing to hide. The texts I have a year before divorce was filed if you going to "applebees" and "ju jitzu"

But I'm not gonna spill too much… but "if javi asks, we went to Applebee's" friends ain't loyal ?

#HH Will address my faults too. No one is perfect and I'm far from that. Just wait on it. Not commenting anything else til it's released

Lowry issued a lengthy response via The Real Mr. Housewife to Javi’s claim that he’s going to write a tell all to be called Heartlessly Hustled, a play on words from Kail’s memoir Hustle and Heart.

She said, “I’m not sure what he’s looking to accomplish by a tell all. Our lives are entertainment to people. Most of the fans who watch the show don’t actually care about us or our kids’s well being, and a ‘tell all’ certainly isn’t going to help Lincoln or Isaac in any way,” adding, “We were married, so we both know pretty much the worst and best about each other. I have enough to publish a book too, but what’s the point?”