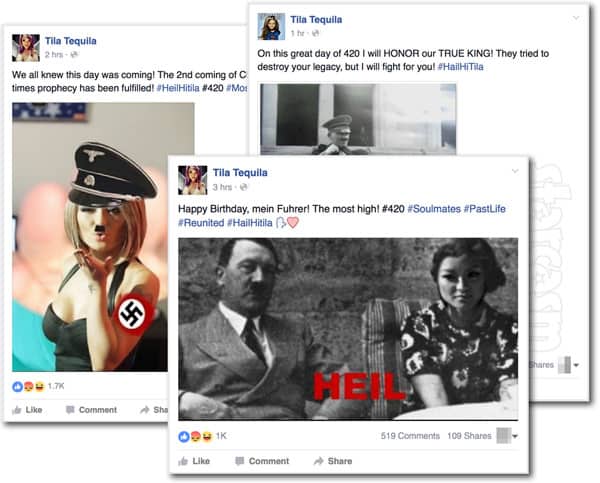 Celebrity super troll Tila Tequila is back at it, stirring up quite a bit of outrage by once again singing the praises of Adolph Hitler on social media. The former reality star and mother of one infamously made headlines back in 2013 when she shared her admiration for Hitler and referred to herself as “HiTila.”

The führer furor eventually died down, but it bit Tila in the ass when she later got a great-paying gig appearing on the UK’s Celebrity Big Brother reality show. Just hours into her sojourn in the CBB house, however, Tila was kicked out by show producers after there was an outcry over her prior Hitler comments.

Tila would later issue a lengthy apology for her prior comments, and she assured everyone that it was something she regretted that would not happen again. From her apology:

I am in no way, shape or form a racist nor antisemitic, and absolutely 100% not a Nazi supporter. It was a careless mistake I made in 2013 while suffering severe depression, drug addiction, and [being] suicidal. That is not the woman I have grown up to be today, and the loving mother that I have become.

I humbly ask for forgiveness from everyone I may have hurt or offended. I just want a second chance at life to start over, and be given a chance to fix my wrongs. It will be a work in progress, but I want to do this so that my daughter will be proud of me one day, and have a positive, strong role model in her life and that starts with me.

In October, Tila seemed to cross the line when she tried to make a joke by giving her daughter Isabella a Hitler mustache in a photo posted online. “One day when you grow up, you’re going to have to apologize for this picture, young lady!!!” Tila wrote along with the picture. “It will come back to haunt you!”

On Thursday, Tila apparently decided to completely abandon the possibility that her daughter “will be proud of me one day, and have a positive, strong role model in her life” as she celebrated Adolph Hitler’s birthday with a series of posts praising him.

“On this great day of 420 I will HONOR our TRUE KING!” Tila wrote in one Facebook post, along with a photo of Hitler in a cape descending some steps. “They tried to destroy your legacy, but I will fight for you!” She added the hash tag #HailHiTila.

In another post, she recycled a black-and-white picture of Adolph Hitler and Eva Braun in which Tila’s face has been Photoshopped over Eva’s. (Tila originally posted the same altered image back in 2013.) “Happy Birthday, mein Fuhrer! The most high!” wrote Tila along with the following hash tags and emoji: #420 ‪#‎Soulmates‬ ‪#‎PastLife‬ ‪#‎Reunited‬ ‪#‎HailHitila‬ ✋♥

Here’s another Tila Tequila Adolph Hitler Photoshopped image that she posted in which she suggests she is the 2nd coming of Christ: 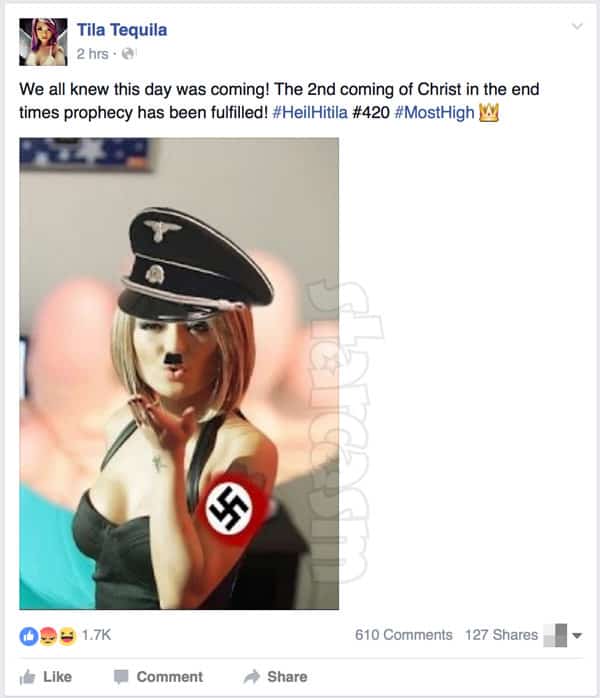 In the caption for this horrifically tasteless text graphic, Tila actually refers to Hitler as “My Love:”

In the comments section Tila added, “The love of mein life!”

Also, in a selfie that she posted on both Facebook (since deleted) and Instagram, Tila used the hash tag #LongLiveHitler

Normally we try to obey the the internet’s virtual sign posting that asks “PLEASE DO NOT FEED THE TROLLS,” but there are occasions where a troll’s attention-grabbing tricks are SO offensive and SO vile that we think it best to feed them a handful of the negative attention they are so hungry for — if only to raise awareness and document their antics for posterity. I can only hope that documenting these posts by Tila (she has already deleted a couple of the posts) will decrease her chances of getting viable job and/or appearance offers in the future. I really cannot comprehend ANY venue or organization, outside of a few extremist groups, that would hire ANYONE that made posts like these! Right?