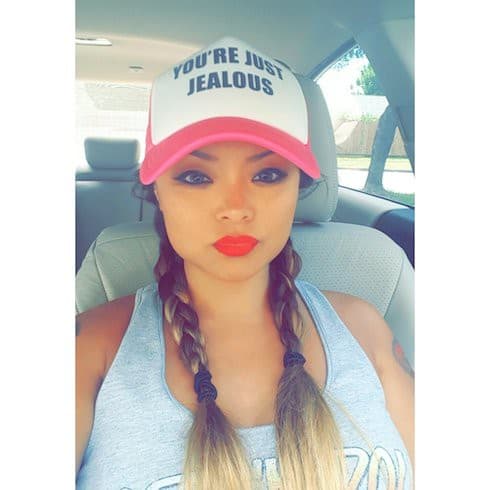 From time to time, Tila Tequila tweets things. On some days, those things make some semblance of something approaching the vicinity of sense. Today was not one of those days. In case you’d forgotten (or were intentionally ignoring the news), this morning marked the beginning of the four-day Republican National Convention, the purpose of which is to bestow upon Donald Trump the party’s nomination for president. However, in Tila’s world, it was occasion to troll the world with a hate-filled Twitter rant in favor of Trump. Tila also dribbled out one of her head-scratching theories of the coming apocalypse in the process.

The process began rather ominously, with this family-friendly dispatch late yesterday evening:

Then, this morning, Tila’s peculiar brand of “chosen one” preaching began:

After that, Tila brought out her brand of tried-and-true racism:

By this point, “Tila Tequila” was trending on Twitter. Almost as if in response, her proclamations got even stranger (if such a thing is possible?):

The last of Tila’s tweets–for now–left no doubt as to the 34-year-old mother and sex tape leaker’s preferred presidential candidate. (Though it’s not clear what she meant by “victorious,” since Trump’s crowning by the RNC is all but official.) 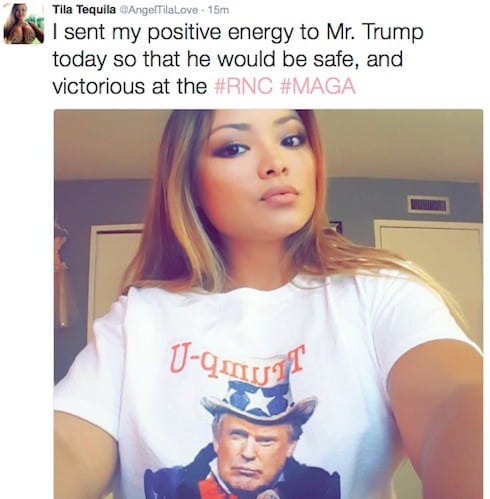 Previously, Tila Tequila had been in headlines for calling Adolf Hitler “The love of mein life” in a social media update celebrating his birthday; celebrated the Brussels bombings by declaring “The earth is cleansing itself”; and offered an apologetic non-apology after wondering why people were saddened by the death of Mob Wives star Big Ang Raiola, since Big Ang was “the wife of a serial murderer mobster.”

It’s probably also worth mentioning that the current rumor abound on Twitter is that Tila Tequila has accepted an invitation to speak at the Republican National Convention. However, her name does not appear anywhere on the official list of confirmed speakers, for today’s or any other day’s events. After today’s outburst, it’s hard to believe that anyone could take such a rumor seriously…but, given the level of discourse dominating the 2016 US presidential campaign, maybe the possibility isn’t that surprising.