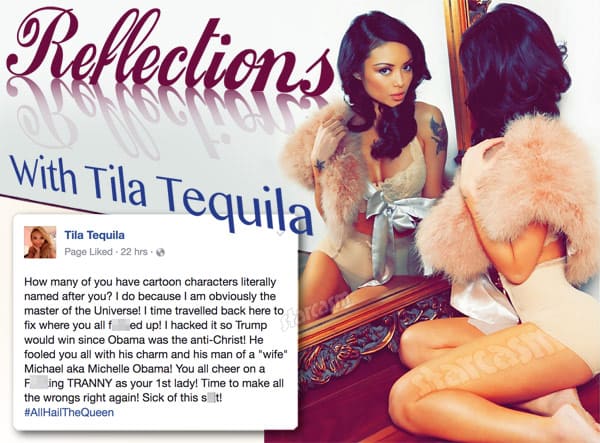 It has been a while since we checked in with Tila Tequila, so we popped over to her Facebook page this weekend where it is perfectly clear that little has changed with celebridom’s biggest inter-dimensional quantum-hopping super troll.

We will start our catch-up post with Tila’s Christmas Day reflections on Donald Trump being elected. (In case you missed it, Tila was one of Donald’s most avid supporters, and she never relented on her prediction that he would win the election despite what the polls suggested.)

It’s almost 2017 and for those of you who are still complaining about Donald Trump you fail to realize that you are no longer living in the same reality that you once knew. We have merged into an alternate timeline now in an alternate Universe! The truth is stranger than fiction and in this alternative universe sh!t is gonna keep getting weirder so you might as well let go of your previous attachments now. Next up is time traveling and teleporting. If you are still confused about it all then do not worry for I am the navigator of this Universe! Remember “Teela” in ‘Masters of the Universe?” Well, that was me! I’ve been hacking timelines and named a cartoon based on myself. Seriously.

Ah, but don’t think for a second that The Donald is actually in charge! “Donald Trump is my puppet,” Tila clarifies in the comments section.

Later that day, Tila revealed that she has Christmas gifts for thousands of people in the form of…earthquakes:

I’m gonna start a few earthquakes just to shake things up a bit. Remember this post so once it happens you’ll know I did it! Remember a few weeks ago on my snapchat I said I don’t wanna freeze my ass off this winter so I’m gonna make it warm? Well, it’s been damn near 80 degrees lately! Hehehehe

More Christmas Tila ramblings, which all but prove that she isn’t cuckoo:

In 2012 I started making a LOT of posts on my fb fan page and talked a lot about how I am a Super Soldier (SS) with many super powers. Of course everyone laughed at me and said I was mentally ill and 4 years later I am manipulating the weather and got Donald Trump into presidency! I then made #Brexit happen as my wrath for having been mistreated during my time in the UK last Summer while on CBB. I then manifested the #AltRight after the fallout! More is coming as I have barely just begun! To be continued….. 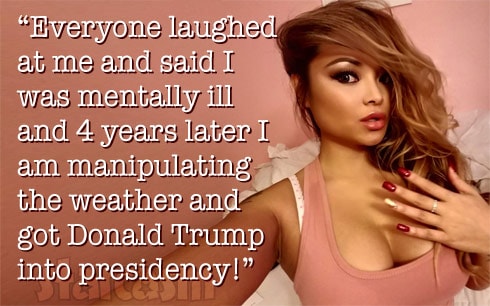 After weeks of basking in the glory of Trump’s victory, Tila is currently basking in the sunlight while on vacation in Jamaica. (Being an inter-dimensional quantum-hopping Super Soldier has its perks!) While in Jamaica, Tila discovered yet another supernatural talent:

I’ve uncovered a new skill that I have! Yesterday I saw a huge falcon and I was able to control the way it was flying by motioning it with my arms! Today I started doing it again and not only did I have all the Ravens follow me but I was able to tell them to go and get more and a huge flock came over! It was so f**king badass! I’m becoming more powerful by the day! #BadassB!tch

On Saturday Tila posted a photo of Teela from Masters of the Universe and offered up these reflections on being the inspiration for that superheroine:

How many of you have cartoon characters literally named after you? I do because I am obviously the master of the Universe! I time travelled back here to fix where you all f**ked up! I hacked it so Trump would win since Obama was the anti-Christ! He fooled you all with his charm and his man of a “wife” Michael aka Michelle Obama! You all cheer on a F**king TRANNY as your 1st lady! Time to make all the wrongs right again! Sick of this sh!t! #AllHailTheQueen

After that little rant, Tila blemished her prophetess cred by continuing to insist that the Houston Texans would beat the New England Patriots in the play offs. Here are her posts from before and during the game, which at least demonstrate that Tila is faithful until the end:

Houston TEXANS are going to win tonight! You heard it here first!

I told you guys that Texans are gonna win! You should have listened! Hahahahahaa! Too late! ???

Just wait until the end when we win! ??

Like I said … just wait. I enjoy seeing all the losers jump around in excitement for a bit before I chop them right at the end! ?????

In case you missed it, The New England Patriots defeated the Houston Texans 34-16. Oh, and I think we’re all still waiting on those earthquakes?

OK, that should get everyone caught up on “Reflections With Tila,” but with Trump’s inauguration coming up within the week, I’m sure there will be lots more gloating soon. And who knows, perhaps Trump will even reward her unflinching loyalty with a cabinet position! Perhaps Secretary of Otherworldly Dimensions? (Is that position still available?)

Tila Tequila says Big Ang ‘was the wife of a serial murderer mobster,’ asks ‘why is everyone so sad?’