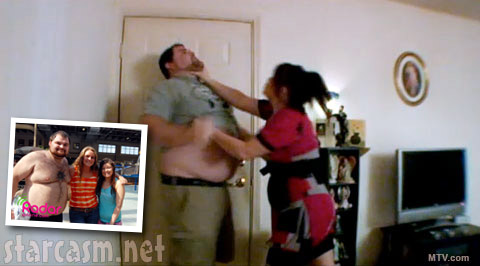 Photos have surfaced of Teen Mom‘s Amber Portwood and Gary Shirley having fun at a water park together on the same day that their controversially violent episode aired on MTV!

The pictures were taken at The Wilderness At The Smokies water park in Sevierville, Tennessee, on Tuesday and feature the couple with daughter Leah looking as though they were all one big happy family. A witness tells Radar Online:

“They were behaving as if nothing had happened as MTV shot scenes of them having fun together.

“I though it was strange because here Amber was with the same guy she had gotten into an argument with and had hit and kicked too.

“It did not look like there were any bad feelings between them and they were acting like any other really happy couple on vacation.

“They were interacting with their young daughter Leah without any problems and the whole family seemed to be having fun.”

Tuesday’s episode made headlines because it featured Amber viciously hitting and kicking Gary after an argument over their daughter leading to a police investigation and even a possible movie deal for the couple!

CLICK HERE to see the photos, but be warned that they do feature a topless Gary, which could be considered NSFW in some states.