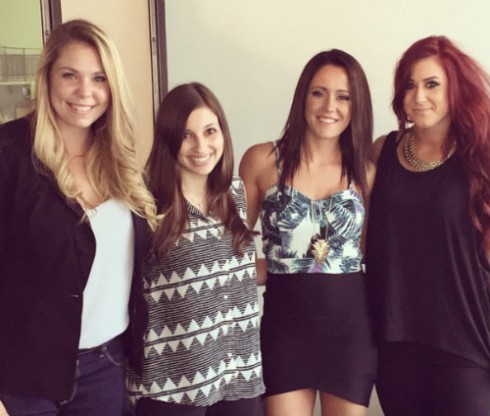 The girls are (mostly) back together! Teen Mom 2‘s Jenelle Evans, Chelsea Houska and Kailyn Lowry are in New York City for press week ahead of next month’s season premiere. They are pictured above with Viacom’s Haley, who humorously noted Leah Calvert’s absence.

“Breaking news: leah has been recast as me,” she said, adding, “#teenmom2 #bestfriends?” It’s unclear if Leah, who reportedly just finished her stay in treatment for stress and depression issues, will join the other ladies.

With the premiere of the new season right around the corner, MTV rolled out new previews for Chelsea and Jenelle yesterday. In Chelsea’s, she mentions ex Adam Lind wants “50/50 custody” of their daughter, Aubree, and that Adam was arrested for domestic stalking. “You’re manipulating my child,” Chelsea accused after Aubree said Adam promised she could go to his house. (Because of embedding issues, the preview is at the bottom of the post.)

Jenelle’s new preview shows scenes from her engagement to Nathan Griffith, her ongoing battle with mom Barbara Evans and then Nathan’s arrest in March for domestic violence.

During this week’s catch-up special, we also got a sneak peek at Leah’s argument with Corey, when he asked her if she’s going to rehab for a drug problem. She denied it, and said “Shame on you.”

There hasn’t been too much more about Kailyn, but it seems the new season will focus heavily on her relationship problems with husband Javi Marroquin.