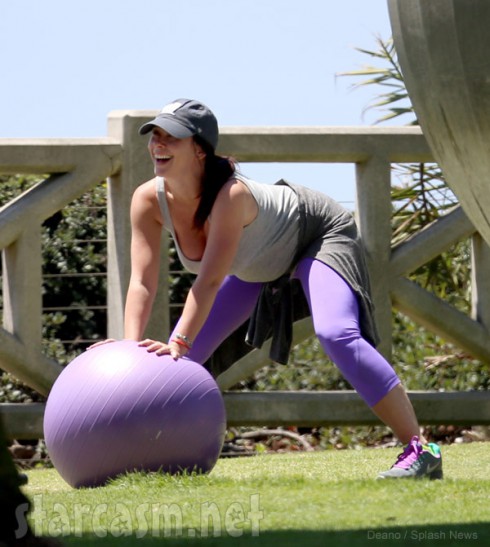 If you’re like me then your world has been a little less joyful since internet haters forced Jennifer Love Hewitt to abandon social media a month after announcing she was pregnant with her first child back in June. The seemingly always positive-spirited star of The Client List tweeted at the time, “Life should be filled with positivity and holding each other up, not making threats and sending bad vibes. To those of you who made it a joy, thank you from the bottom of my heart.” (You can read her entire departure message here.)

But, thanks to what I assume was a rather sneaky paparazzo, we have a little injection of J. Love joy for you in the form of photos taken while the expectant mom was performing a workout with a personal trainer in a park in Los Angeles earlier today. The very pregnant Hewitt can be seen smiling (as always!) as she lifted weights and worked with a large inflatable ball, that matched her pants of course. (You can’t let a little thing like pregnancy get in the way of coordination y’all!)

In addition to the lavender capri workout pants, Jennifer was wearing a light gray tank top, a dark gray long-sleeve shirt (or light jacket?) tied around her waist, a dark gray ball cap, and a pair of colorful sneakers. 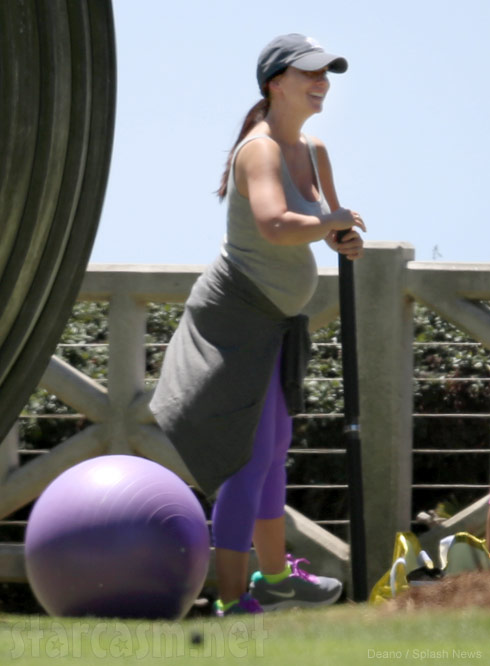 At the time of the pregnancy announcement in early June, Jennifer was reportedly three months along, which means she is now on the home stretch in the ballpark of five months. (I dunno – that’s a pretty big baby bump for five months!)

We continue to send positive vibes Jennifer’s way in hopes that she will soon return to the internet where she can keep her fans updated on her pregnancy process.

* It should be noted that Jennifer did make a singular tweet in August to promote awareness of a diaper crisis among poor families:

Breaks my heart for these moms, just had to share: http://t.co/FLZU5Xq2Rd – @LADiaperDrive keep up the amazing work! #positivetweet