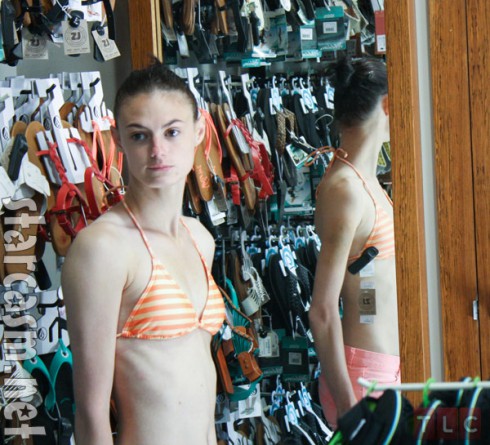 On this Sunday’s episode of Breaking Amish: LA the guys and gals get “English” makeovers, and given the fact that they are in Los Angeles, of course the young ladies are going to have to tackle the least Amish and most intimidating of English attire: the bikini! Above we see the candle-burning Betsy working a bit of the oldest kind of witchcraft by trying on a teeny tiny orange-striped two piece.

Betsy looks a little unsure of herself in the photo, but she looks great! (Insert a can of lard joke here.) The picture actually has me singing along in my head to some very slightly altered lyrics to a classic novelty song from 1960…

It was an itsy, Betsy, teenie, weenie, white and orange striped bikini
That she wore for the first time today

The Betsy bikini photo above is the only preview shot released by TLC of the ladies’ makeovers. In contrast, there are lots of photos of Devon, Samuel, Matt and Andrew’s new Englishified looks! Click here to see those photos!

For the ladies you’ll just have to tune in to the new episode of Breaking Amish: LA this Sunday at 10/9c on TLC!

Dourtney made Dr. Drew and his audience uncomfortable