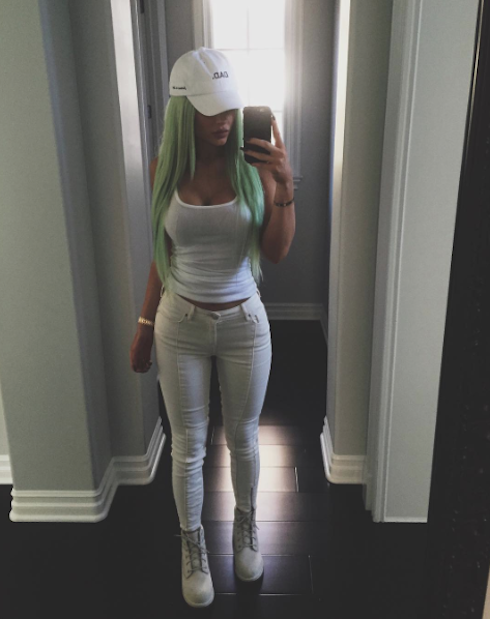 If you’re thinking that it was only a week ago that Kylie Jenner had 35 million Instagram followers, you’re right. Kylie didn’t do anything special to celebrate that particular milestone–except, of course, to share an Instagram post thanking her many fans. Since then, though, Kylie has drawn a huge amount of attention to herself, in the form of a hot new app, and some hot new Snapchat posts featuring boyfriend and occasional rapper Tyga.

So, this week, “Kylie Jenner green hair” became a thing. The 18-year-old stepped out with a new look in celebration of her new Instagram milestone: 36 million followers and counting.

Kylie Jenner Green Hair debuted during the grand opening of the Sugar Factory American Brasserie restaurant in New York City, which prompted a wave of screaming and cheering from some of Kylie’s (and her hair’s) loyal fans:

People asked Kylie if her ever-changing looks are hard for Tyga to deal with. She responded “Not really. I feel like he’s always been with girly girls, so it doesn’t freak him out.”

What do you, the viewers at home, think of this new look? Is “Kylie Jenner Green Hair” a good idea, or should Kylie revert to her natural state?

When is Kylie Jenner’s baby due? Conflicting reports muddle timeline

PHOTOS Willow Smith is 13 going on 30